You are here: Home » Features » Sippican Students Reporting for Duty

Under the guidance of District Video Coordinator Debbie Stinson, the girls meet every Wednesday to bounce ideas off each other and toss around topics of interest, each of them eager to jump into the limelight, either in front of or behind the video camera.

Ask this group exactly what it does to report the news to their fellow students and they will rush to answer, like they did on the afternoon of January 22 inside the music room at Sippican School.

“Basically, this group is a bunch of mini reporters,” said Caroline Owens, leaping out of her chair. “We go to different events, mostly school events, but other events too and give interviews.” The girls were excited to share their role as reporters and the fun they are having doing it.

“We did some teacher interviews,” Meghan Horan called out. Another girl shouted, “We did some dances!”

“We’re a little dysfunctional,” said Owens speaking on top of the others, eliciting laughs from the others.

“We’re learning a lot about reporting, how to work the camera, and how we should report,” said Horan.

The Cub Reporter program is funded through a Lighthouse Fund grant and the ORR Tri-Town Education Foundation.

“They actually shoot everything,” said Stinson, adding that the girls do all the reporting and filming themselves. “I edit it, but they shoot all the shows and interviews.” Stinson then passes the finished product over to ORCTV where it is aired.

The group’s current production features a sea lamprey dissection, hosted by Daphne Poirier. “The video camera cannot catch the smells,” said Poirier waving her hand in front of her nose. The girls had a good laugh and whipped out their press passes to show off.

“They have a lot of energy,” said Stinson. “And they’re actually really good reporters.”

During recess and flex-time, the young reporters grab their cameras and get to work, currently arranging for a FaceTime interview with a student who is traveling to Australia for six months.

“I like being behind the camera,” said Rachael Fantoni. “I just watch the reporters and give them advice.”

Horan said she enjoys reporting, but the hardest part for her is keeping a straight face and transcending ‘the giggles.’

“I’m a horrible reporter,” said Horan laughing. She was referring to an interview she was conducting with a teacher. “He was just sitting there smiling at me … I could not stop laughing.”

Poirier said she likes getting to see stories in a new and different light, getting up close to the events like a “V.I.P.”

“I like knowing what’s going on in the school and all the events.”

As much fun as they are having, none of them said they had any interest in pursuing a career in journalism – except maybe as a hobby. “But not as a job,” stated Poirier matter-of-factly. 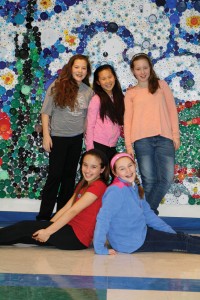