In planning Old Rochester Regional High School’s 2013 Alumni Summer Production, Director Paul Sardinha was forced to drop the contemporary in favor of the classic just four days before auditions were set to start.

Because a Broadway touring company was presenting “Legally Blonde” within a certain geographical radius and time frame, rights issues dictated that Sardinha and his crew find a new musical.

“It was two months before we were going to open,” said Sardinha, who has led the Drama Club for 21 of his 24 years at ORR. “We needed to produce something really quick.”

So, he and his Assistant Director, Sheila Furtado, reached back into the past for a show they put together in 1995: The “Irving Berlin Revue.” Their celebration of the legendary songwriter’s catalog had found success in locales as close as the Marion Art Center and as far-flung as Bainbridge Performing Arts in Seattle.

“It’s a great journey across Irving Berlin’s huge body of work,” Sardinha said. “It’s family-oriented, cabaret-style, with black dresses and tuxedos and costume pieces and props. Everybody knows at least 10 of these songs.”

The revue, at two and a half hours, contains 40 songs, including “There’s No Business Like Show Business,” “Anything You Can Do I Can Do Better,” “My Wife’s Gone to the Country,” and “God Bless America.” The cast is comprised of 46 ORR Drama Club alumni and current students.

Conductor Michael Amaral, Class of 2007, said he was commuting from Danvers, where he teaches music, to participate in the production.

“It’s a thrill to be back working with Paul and Sheila,” Amaral said. “This is my third alumni production. It’s always nice to be back. Paul says ‘Jump,’ and I say ‘How high?’”

During a recent rehearsal, Sardinha, Furtado, Amaral and Costume Designer Helen Blake took the cast through various numbers and exercises for upward of three hours on a Wednesday evening, with opening night a week away. Furtado, for her part, was impressed.

“These are young adults who understandably had little concept of the Great American Songbook,” she said. “Their homework was to YouTube all of the videos. They are embracing it, enjoying it, and making it their own. I admire them. These young voices doing the songs: It gives me goose bumps.” 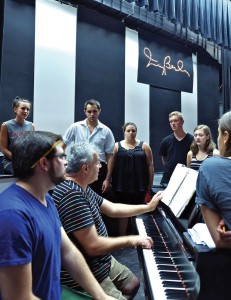