A descendant of the “original Hartleys” of Rochester, Norene, 69, grew up in and continues to live out her life in the rural Southcoast town, working as a carpenter and spending a great deal of her time preserving the land and open spaces of Rochester as a volunteer with the Rochester Land Trust.

A new book just published this January called Being Where You Are, written by Robert Barossi, dedicates a chapter to Hartley, who is one of the original founders of the RLT formed back in 1996.

Barossi said during a phone interview that the work began while developing his thesis for his Master’s degree in environmental studies from Green Mountain College. While he was an intern for the Trustees of Reservations, he began working in communications, writing press releases about the organization’s “small army of volunteers.” It turned into something bigger for Barossi, who calls this work “the most rewarding and exciting work of my life thus far.”

Barossi said he cast a wide net while contacting land trusts around Massachusetts, Rhode Island, and New Hampshire. He interviewed volunteers from a number of different environments from coastal to rural settings, and eventually compiled the material into a book. Barossi said he “really wanted to get the word out there” about the work of these dedicated volunteers.

The Rochester Land Trust was one of about 80 different land trusts Barossi reached out to. He said Hartley offered a unique perspective on Rochester because of her emotional connection to the town.

“When seeking volunteers, Norene was truly one of my favorites,” said Barossi. “She had this great personality, a great sort of rugged New England sass about her. But at the same time, so sweet and so giving of her stories and her past.”

Barossi, while developing the book, said he wanted to let people know what environmental volunteers are doing to preserve the environment and spare land from excessive development. The volunteers he met over the course of three years, said Barossi, were what inspired the book. He remembered Norene especially for her insight into “the good old days” of Rochester and how it has developed over the years from a rural population of 1,600 when she was a child to the over 5,000 residents of today.

“Norene, she had such a unique perspective because her family had lived in Rochester for so long,” said Barossi. “What it used to be and how it has all changed.”

Chapter 13 of the book, titled “Keepin’ it Rural: Norene Hartley,” is chock full of that insight and knowledge Hartley possesses of Rochester, with candid recollections of her childhood exploring nature and her return to a more developed Rochester after living 26 years away.

“I have to tell you, when I was growing up, outdoors was the place to be,” Barossi quoted Hartley in his book. “I’d get home from school and it was like five seconds from the time I hit the back door to the time I was going back out in my play clothes.”

Hartley also describes leaving Rochester in 1963 to attend college and returning to “houses all over the place.” She joined the Rochester Master Plan Committee in 1996, which she says in the book, “I swear it almost did me in.”

“It’s a very emotional thing,” says Hartley. “You grow up in a place and it seems like an old comfortable shirt or something, and it’s always there in some respects.” Starting the Rochester Land Trust was Hartley’s way of preserving the character of the town, a rural community.

“I think we’ve done pretty well,” Hartley told Barossi. “I think you have to get down to the nitty-gritty.” Hartley describes a memory of when she was two-years old, playing in stump holes in her family’s backyard, “sitting there and my butt was damp and my knees were wet but the sun was really warm.…” Hartley continues, “So I guess I’ve had it since two, at least. So, I guess the Land Trust is just a community extension of how I am.”

“He (Barossi) was able to capture that about her in his book,” said Gerrior.

The book has been published in eBook form, but it could result in a hard cover in the future. Barossi said he wanted to write the word about the volunteers and get it out there sooner rather than later.

Being Where You Are by Robert Barossi is now available and can be purchased and downloaded from amazon.com, iTunes, and barnesandnoble.com for $1.99. 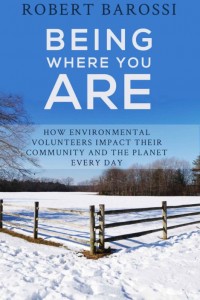