Here is a look at the eleventh week of scheduled games for ORR winter athletics.

Boys’ Basketball: The boys’ team had no scheduled games this week, as their regular season wrapped up last week. They did, however, receive their seeding for the Division 3 South tournament. ORR, Wareham, and Martha’s Vineyard sat atop the rankings, each with a 16-4 record, but due to a coin toss, Old Rochester received the top seed. They also received a first-round bye thanks to the top seed. The Bulldogs face off against the winner of the GNB Voc-Tech/Burke game in their first playoff game on Thursday, February 27 at 6:30 pm at Old Rochester.

Girls’ Basketball: The Lady Bulldogs wrapped up their season this week with a game against Bishop Stang, 46-16. Though they suffered a tough loss to end their season, the game also marked the annual senior night, where ORR seniors Michaela Bouvette, Isabelle Riley, Curran Desjardins and Bri Perry were honored. The four seniors have done a good job of leading a young team to several conference wins, and their presence will be missed next season.

Boys’ Track: The few remaining track athletes participated in the MIAA Auerbach All-State Meet this week, where they went up against the best track athletes in the state. Kevin Saccone placed seventh in the 55-meter hurdles, posting the fastest time for a junior in 7.94 seconds. Saccone also placed tenth in the long jump, jumping 20’11”. The other lone Bulldog, Colin Knapton, placed 21st in the 300-meter dash with a time of 37.66 seconds. The all-state meet generally wraps up the season for track, but several of ORR’s finest athletes will be competing in the national competition later in March.

Girls’ Track: The girls’ team also competed in the All-State Meet, with team captain Paige Santos having the busiest day. Santos placed 15th in the 55-meter-hurdles with a time of 9.05 seconds, and then went on to place 18th in the high jump with a leap of 5’2”. Santos would also run a leg of the girls 4×200 meter relay with teammates Abby Adams, Bailey Truesdale, and Morgan DaSilva, placing 17th in 1:49.9.

Ice Hockey: The ice hockey team had the busiest week of any ORR sports team this week. They began their week with a 3-1 victory over Somerset-Berkeley, but then followed it up with two tough losses to Bishop Stang, 7-0, and Cohasset, 5-0. Luckily, the losses did not affect the boys’ playoff chances as they qualified earlier in the season. The ORR/Fairhaven Bulldogs, who clinched their second consecutive SCC Championship last week, received the 13th seed in the Division 3 South tournament, and face off against 20th seed Dartmouth in the preliminary round.

Below are the overall winter team records, followed by the conference records in wins, losses, and ties as of February 23. 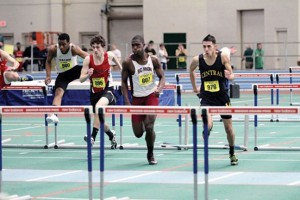