You are here: Home » Schools » Students Strive to Make Change

Student activism has a long history in America. With their energy and passion, students have the power to change the culture and direct the conversation within their schools and beyond. Whether by starting clubs or inviting the community to help on a more specific project, members of the Tabor Academy community were able to raise awareness and start conversations about gay rights in the U.S.

“During my first two years at Tabor, I feel like the topic was pretty much ignored,” said Ward. “Not a lot of people were talking about gay rights, and I felt like the community needed to be more educated and more inclusive.”

The purpose of the GSA, she says, is to provide a safe space for members of the LGBTQ community and allies to express themselves without judgement. She also hopes that her club will start meaningful discussions around campus.

The biggest event planned by the GSA this year was a day called “Changing the Game.” The goal was to have athletes and captains of teams at Tabor pledge their support to change the language used in locker rooms and during games that can isolate LGBTQ students.

“Changing the Game at Tabor means that any athlete, regardless of sexual orientation, gender identity, or any other factor, can pursue their passions without fear of stigmatism,” said Ward.

Together, along with many athletes and coaches who volunteered, Ward and Kaszanek made a video of various pledges that was shown at all-school.

Ward also attended the recent Student Diversity Leadership Conference in Florida, which a handful of Tabor students attend every year.

“SDLC widened my horizons by educating me on aspects of LGBTQ activism I hadn’t previously considered,” said Ward. “For example, underrepresentation in the media is a huge issue for Trans* men and women of all ages, which I hadn’t focused on until now.”          Looking towards the future, Ward hopes to widen her scope and focus on more and more aspects of the LGBTQ community to ensure healthy, productive discussion.

Another student working to change the cultural conversation is Tabor senior Brooke Wakeman. While doing a project for her Civil Rights class, Brooke looked up the Google definition of marriage.

“When I read the definition, I immediately noticed that it sounded as though same-sex marriage was added as an afterthought, as if it were less important.”

From this, she got the idea to start a petition to change the definition to make it more inclusive.

“It’s a cause worth pursuing because equality is so important,” said Wakeman. With over 26,000 signatures and growing, she notes the support of the Tabor community. “They were the first to sign the petition,” Wakeman said. “And they’ve been supportive the whole way through.”

Students like Ward, Kaszanek, Wakeman, and many others who join these causes, have an incredible power to shift the conversations in all parts of the community, from the classroom to the locker room. Their choice to focus this talk on LGBTQ rights helps to strengthen the cause in the community and bring attention to an important, socially relevant topic.

[Editor’s Note: Trans written with an asterisk, Trans*, is an umbrella term that refers to all of the identities within the gender identity spectrum including (but not limited to) transgender, transsexual, transvestite, genderqueer, genderfluid, non-binary, genderless, agender, non-gendered, third gender, two-spirit, bigender, and trans man and trans woman.] 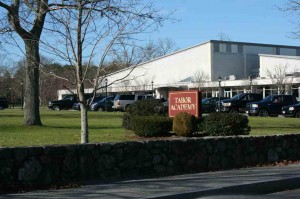