You are here: Home » Features » ORR Student a Trailblazer in Engineering

Old Rochester Regional High School senior Nicole Mattson has grabbed herself an ‘A’ for her senior project in Tom Norris’ Intro to Engineering class – a robotic claw she printed from the school’s 3D printer, assembled, and programmed to open and close on its own.

A lot of time, sweat, and brainpower were involved for Mattson as she mastered the multitude of tedious steps to bring her robotic claw to life, so to speak. And as all the other students in the class completed a final exam at the end of the course, Mattson, “practically the only girl in the class,” she said, was showing off her alternative final she designed, built, and executed herself.

“I think a lot of people in class were jealous because I got to play with the 3D printer,” joked Mattson. “They probably doubted that I was making something interesting.”

Biology has always fascinated Mattson. “The science behind living things is so interesting for me,” she said. She sees a future in bioengineering and developing prosthetic limbs, which is reflected in her choice of building a robotic claw for her senior project.

The claw is assembled from over a dozen plastic pieces printed from the 3D printer and lots of glue. A few nuts and bolts hold together the joints that enable the claw’s pincers to open and close at a programmed interval of however many seconds Mattson desires.

There was a lot involved in the process, however, and after the design steps were completed, including the cardboard model, Mattson was permitted to take the 3D printer home over the four-day Martin Luther King Day weekend, and thus began a period of trials and errors galore.

“There was a lot of file converting,” said Mattson. She found a 2D image of a claw she liked online, and converted the image into a three-dimensional design.

She spent hours upon hours printing the plastic parts and solving a number of technical difficulties like clogged plastic cartridges and recalibrating the printer.

“It’s not like a regular printer with paper,” said Mattson. “It’s a little more complicated.”

From home, Mattson printed out piece after piece, some taking 30 minutes and others up to four hours.

“My parents must have hated it,” said Mattson. “It made so much noise in our house.”

Some pieces only printed out halfway and had to be redone, and every trial, every error, was a test of patience and perseverance. But she always figured it out, she said.

“There was always something,” said Mattson.

Assembly took a lot of glue. “Lots and lots of glue,” she recalled.

“Then I had to program it. This was a very long process.”

She programmed the claw’s “servo,” a small motor with integrated gears, by connecting it with an “arduino,” a simple microcontroller board, which Mattson said “tells something else what to do.”

“That took a lot of time and energy because I didn’t know the angles it needed to open and close,” Mattson said. That night before, she was still tinkering with it before it was ready to present to Mr. Norris. “I turned it on and the servo just started to spin.” Not exactly what Mattson had wanted it to do, “So, I had to adjust the angles.”

Norris said Mattson was the first student to use the 3D printer for a final project. He recalled when Mattson first learned the school actually had a 3D printer and how excited she was.

“She pretty much did everything on her own,” said Norris. Given the nature of the project relative to Mattson’s interest in developing prostheses in the future, he called the project and its use of the 3D printer “a real world application.”

According to Norris, the engineering program at ORR really hadn’t quite adopted a specific direction in regards to integrating use of the 3D printer into the curriculum. “And then Nicole came along,” Norris said.

Mattson has been accepted into Worcester Polytechnical Institute, but has not yet settled on a placement. 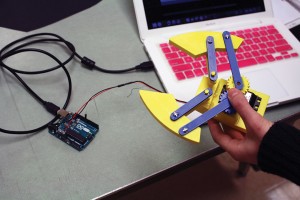 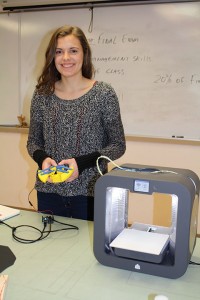