A new grant could give senior citizens in the Tri-Town money to help make their homes handicap accessible if the district applies for it and it is approved.  Mattapoisett Town Administrator Michael Gagne proposed the idea at a Tri-Town Selectmen meeting on Thursday, November 29 at Old Rochester Regional High School.

The grant is part of the Regional Housing Rehab Grant Application program which is a statewide initiative to help senior citizens make their homes more handicap accessible so they would not have to move into assisted living facilities.

The money awarded to residents could be used for a multitude of projects such as constructing wheelchair ramps, replacing roofs and making electrical repairs.  Because many senior citizens are dependent upon social security, they are lacking the funds to be able to make these upgrades to their homes, forcing them to move out.

Gagne suggested the Tri-Town apply together as the majority of the grant money is issued on a regional basis. Applications for the grant are due in the summer in July and August.

‘We’re all too small to run for this by ourselves, but the benefits are great,” said Gagne.

In other news, Rochester Town Administrator Richard LaCamera warned the Selectmen of the possibility for more 9C statewide cuts that could come as soon as January in the middle of the Fiscal Year.

‘We have extreme concerns for Fiscal Year 2014,” said LaCamera.

9C cuts are conducted by the Governor and they only affect employees of the state. The towns are worried that due to the economic crisis and the hiring freeze on state employees, more 9C cuts could be on the horizon.  Additionally, the investigation in the state’s drug lab scandal is costing the state more money than originally anticipated.

Still, despite the fear of cuts, the Selectmen are satisfied with the open communication that Superintendent Doug White has had with the towns regarding this issue.

Don Cuddy, the new Executive Director of Old Rochester Community Television, introduced him to the Selectmen from each of the three towns.  Cuddy, who wrote for the New Bedford Standard-Times for ten years, replaces Kim Miot in that role.

“I regard this as a great opportunity and challenge,” said Cuddy.  “I want to make local cable relevant to the people.  Local news is what people really crave.” 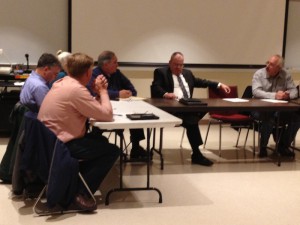