The June 22 meeting of the Marion Conservation Commission was moving along smoothly until a discussion with Jay Myrto of Clean Energy Collective got off to a rocky start.

Chairman Norman Hills inquired why Myrto hadn’t considered an alternate screening plan for the Tucker Lane solar array versus the one the Planning Board had put in place during a June meeting. At that Planning Board meeting, Myrto was told that the neighbors wanted additional screening, felt the array and land clearing was decreasing their property values, and demanded action from the Planning Board.

The issue for Hills and the Conservation Commission: the new plan was in jurisdictional wetlands. Hills questioned Myrto as to why he hadn’t considered an alternative to the Planning Board’s plan of putting additional screening plants in the bordering vegetated wetlands. Myrto said that was possible but really felt he needed to follow the Planning Board’s directive.

That frustrated Hills, causing him raise his voice and ask, “Why can’t you just do what we asked you?” He said that the Conservation Commission was responsible for the wetlands in question, not the Planning Board or the abutters.

Compounding the issue, during construction of the solar field, a sub-contractor of CEC had removed native plants and shrubs in an area that was not to be altered and left behind what was described as a “scar.”

Myrto now found himself in the middle between two of the town’s governing bodies that had very little collaboration or cooperation, as noted by commissioner Cindy Callow.

Callow said, “I went to the Planning Board meeting. They said they would help you; you see how many are here now.” Myrto was alone. She continued, “They have never come to us in a cooperative manner. Perhaps things could be handled better. I understand they are voted in and we are appointed. It’s a tempest in a teapot.” Then hitting a more conciliatory note she said, “The plan that has been approved by the Planning Board is okay with me. For the town, we need to work better together in the future.” Hills added, “We said we’d be glad to talk to them.”

“We approved a plan; it was done,” Callow said referring to the first order of conditions the commission had imposed on the project that was subsequently breached by sub-contractor. “In the future, we need to talk as two boards. We reached out to them; they didn’t come back, but to expedite things and make things happy we should approve this plan.”

Commissioner Joel Hartley said, “I’m not as worried about it as Norm is. I’m okay with the new plan.”

In the end, the commissioners voted to amend an enforcement order put in place when the unpermitted clearing was deemed a violation of the order of conditions. The amended enforcement order will allow the additional plantings in the jurisdictional border. Hills abstained from the vote.

Warren Williamson, 121 Converse Road, represented by James Manganello of LEC Environmental, requested an extension permit. Manganello discussed with the commissioners violations to orders of conditions saying, “The property owner is regretful and sorry it happened and wants to be a good steward of the land.”

Hills said, “There is a disconnect between what we thought we were approving and what we found.” Manganello said that Williamson presently lives out of state and was unaware of local policies regarding landscape alterations. Manganello said that of the wetlands area impacted, “…there’s a lot of diversity out there … just about everything is growing back … the root systems were not removed.”

Callow referred to the alterations as “extensive” with both Hills and Hartley agreeing. Hills said the commission needed to “get smart” in the event they are faced with such a large violation in the future while rhetorically adding, “The question is how do we go from here to there.” A one-year extension was approved with a caution to the applicant, a request to replace delineation flagging, and the development of a wetlands vegetation plan.

The commissioners also discussed what action they should take on violations at 13 East Avenue owned by L. Reinhart. Seawall construction had been deemed unlicensed by the commission. The commissioners concurred that a license needed to be secured from the Massachusetts Department of Environment Chapter 91 as well as a notice of intent which had never been filed. Hartley said that an enforcement order and notification to the DEP was in order. Callow said, “We told them once and they didn’t do anything. We need to up the ante a little bit.” The commissioners agreed to send enforcement letters.

Doug Thackeray’s NOI was continued until July 27 pending notification from the Massachusetts Division of Marine Fisheries for inspection of Thackeray’s aquaculture project off Stewart’s Island in Sippican Harbor.

The next meeting of the Marion Conservation Commission is scheduled for July 13 at 7:00 pm in the town house conference room. 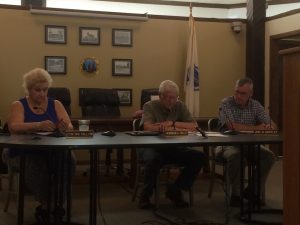