The annual tri-town herring meeting was the first order of business for the Mattapoisett Board of Selectmen. In attendance were Herring Inspectors Bob Martin, Mattapoisett; David Watling, Rochester; and James Gurney, Marion. They reported that in spite of last year’s encouraging numbers, this year’s count is down by approximately 8,000. Eight years ago the count had been 150,000 but in more recent years as low as only 10,000. This year it was 20,000. A moratorium on catching herring as they swim upstream will not be lifted but will remain in place for the foreseeable future, they said. The state requires that counts be a minimum of 100,000 before fishing may be approved. There seems to be no conclusive reason for the low counts. The inspectors will remain acutely aware of any changes in water quality and levels.

Highway Department Supervisor Barry Denham came before the board to report on snow removal activities and the status of the snow removal budget. He noted that the department is $2,000 over-budget. It was felt that given snow fall levels, this was not an unreasonable sum. The overall budget is $77,000. Although it seems as if this season has been worse than last, Denham said that the snowfall total for the winter of 2012-13 was 59 inches while so far this year it has been 63 inches. Denham and Town Administrator Mike Gagne discussed putting a separate line item in the 2015 budget specifically for equipment repairs associated with snow removal equipment. The average cost for repairing damaged plowing equipment runs around $3,000 annually or 10 percent of the total repair budget, Denham said. He also said that his crew of 15 full- and part-time drivers is a dedicated group who sometimes work up to 38 hours to ensure the roadways are safe for residents. On this theme, he asked the board and Gagne to consider paying them overtime rates when they have to work through their regular shift, into overtime/overnight shifts, and then back to their regular shift without a break. “It’s kind of a kick in the pants to give them straight time when they’ve been out all night,” he added. Gagne said this would be considered during wage negotiations.

During his update to the selectmen, Gagne said that tax title land auctions would be taking place on March 7 at noon at the library. He encouraged the public to visit the town’s web site and review the parcels that will be up for sale. He said that one parcel was particularly attractive with the site already having been ‘perc’ tested, delineated for wetlands and with sufficient frontage. This lot is located on Brandt Island Road and will be auctioned off with a starting bid of $70,000.

Gagne has also been working with Rochester on the upcoming cable negotiations. The current contract ends in December 2015 and was developed with Rochester. By partnering with another town, he said, the costs associated with having a professional negotiator working for the towns is shared. Gagne indicated that Bill Hewig, an attorney specializing in municipal cable license negotiations, is interested in being retained by Mattapoisett and Rochester.

Budget reviews with department heads continue, Gagne reported and said that the Capital Planning Committee will begin meeting soon. For waterfront improvement, he said that bids for the electrical work for the town wharf will go out shortly, and that he has met with the architect doing work on the beach house. Repairs and improvement to the beach house are scheduled to be completed before the summer season begins. Gagne also said that wharf concession bid forms are now available in the administrator’s secretary’s office and must be completed and returned by noon on March 21.

In a final item, Selectman Paul Silva asked what the process was for reporting street light outages. Melody Pacheco, Assistant to the Town Administrator, said that people can report outages to the police or to herself, and she in turn contacts the utility for repair. The town has a maintenance contract with NSTAR for such repairs.

The next meeting of the Board of Selectmen is scheduled for March 11 at 7:00 pm. 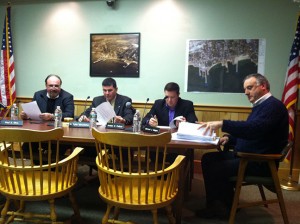