Serkey said the Rochester element of the solar facility proposed for Karen and Dennis Clemishaw’s property off Perry’s Lane is limited to the access site off Tucker Lane. The board had told G.A.F. Engineering, LLC’s engineer Bob Rogers that it would not easily grant a list of waivers the applicant had asked for the project. Rogers, who argued that a stormwater waiver is appropriate because no stormwater drainage system that would prompt a site plan review is slated for the site, pointed out that the Planning Board’s own engineer hired to review the site found no objection to the waiver for stormwater drainage.

But what flows into Marion, stays in Marion, Rogers told the board.

“Why are we even having a discussion of this in this town?” asked Serkey. Johnson replied, “Because we reserve the right … to look at anything that involves this project and based on what Marion does and does not do.”

“Decommissioning?” said Serkey. “I would suggest to you that that is governed by the Town of Marion.”

“Should Marion waive something that shouldn’t be waived, or doesn’t put something in their decision, we’re going to reserve the right to put it in our decision.”

The board discussed the waivers, but decided not to take action and continued the public hearing until a later date. Board member Gary Florindo supported the idea of holding off on any waiver approvals.

“I would rather hold as much control as we can,” said Florindo. “Not because we want to cause problems for the project, but if things pop up…. If we give them the waivers … we’re going to lose a little bit of control.” He continued, “We’re not here to control the project … or tie you up, but if we have to act, we have to hold the right to act … if something’s not right.”

The Planning Board held this site plan review hearing for the project based on an earlier decision that the applicant would have to submit whatever applications and accompanying plans with Marion to Rochester as well.

“My point,” said Serkey, “is that each town has separate interests that are within each town’s separate jurisdiction.” He said both towns do not have jurisdiction over all of the aspects of the project unless it has an impact on that town’s particular interests.

But there lies the potential for an abandoned solar farm viewable from Rochester, said Planning Board member Ben Bailey.

“The view would be ugly if it was abandoned and not decommissioned properly,” Bailey said.

The board suggested, due to the ambiguous nature of the waivers requested, the applicant should withdraw the letter requesting the waivers and submit a new one.

There was some concern from Johnson regarding the life of the solar arrays and the responsibility of decommissioning an abandoned project, suggesting perhaps the board should require a bond to cover the cost, should the project be abandoned.

Greg Carey from Clean Energy Solutions suggested the board could make decommissioning a condition of the site plan approval. But, conditions without monetary backup, said Johnson, usually get ignored.

“Do you bond every condition … you place?” asked Serkey.

Of course not, Johnson told him. “It costs money to enforce it. We’ve seen this in subdivisions,” said Johnson. “When someone’s holding something significant, they’ve paid attention.”

The project currently calls for an Astroturf-like screening that would attach to the chain link fence around the site for screening, but the board favored more natural screening such as trees and a berm. However, pointed out Rogers, live trees would need water and constant maintenance or they would die.

Abutters to the project present that evening all supported the project, saying they would prefer to see a solar farm at the site than any other commercial project.

As the project moves through both Marion and Rochester, Rogers said, as Marion makes suggestions for changes, Rochester would receive those fresh changes and stay “ahead of the game” when it comes to the changes. 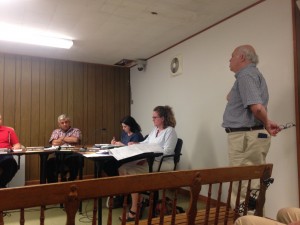