Betsy Dunn might have captured what her fellow Zoning Board of Appeals members were thinking on Thursday night as they pored over final plans for Baywatch Realty Trust’s 40B project off of Front Street.

“I feel bad about it,” said Dunn, referring to the result of the long process – often adversarial and fraught with the looming threat of litigation – between the town of Marion and Baywatch. “But I gave it my all.”

“For more than a decade,” added ZBA Chairman Eric Pierce.

The ZBA reviewed landscape, parking, lighting, and other specs provided by Baywatch.

“Does anybody see anything grossly different than what we were told or what we asked them for?” asked Pierce. “I think they’ve done what they said they would do.”

The standout concern expressed by members is the location of the school bus stop for children living in the development.

Elsewhere on the agenda, Marion resident Tad Wollenhaupt informed the board of his intent to purchase the former Jenney’s Garage land on Point Road, which he plans to continue as a business in its pre-existing nonconforming capacity. Wollenhaupt is a general contractor who said he will “use the buildings as they stand” for storage and a light workshop between the hours of 8:00 am and 5:00 pm. He also said that he might potentially build a breezeway between structures.

The property is just under an acre. Wollenhaupt said that the drywall, heating system, and doors have been replaced recently, and the site improvements he would take on would be limited to painting, windows, and repaving. He told the ZBA that he and his three employees would work at the facility, with little impact on traffic.

While Wollenhaupt’s presentation was informal – he is also considering properties in Fairhaven and Dartmouth, but said he prefers Marion – the board responded favorably to his pitch.

We would like to see these buildings utilized rather than torn down,” Pierce said. 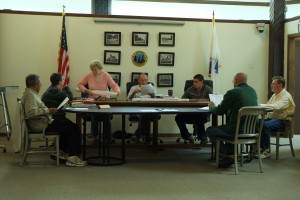