The Marion Conservation Commission held their regular meeting on Wednesday night and opened with a continued hearing from November 14 regarding a Request for Determination of Applicability filed by the Town of Marion to restore and maintain the grounds at Washburn Park.

Marion Selectman Jody Dickerson has been representing the town for the project, which would include the renovation of hiking trails and the installation picnic benches at the skating pond.  The plan hit a speed bump when Dickerson was unable to locate a map that depicted the entire area.

“There was a concern that the map I gave you folks did not have the south side of the skating pond.  I don’t have anything.  Diane [Drake] has been working to help us out.  But we found nothing,” Dickerson said.

He suggested that they start work on the project in other areas of the park.

“I’d like to get something going during the winter time if possible,” he said.

The Commission was amenable to the idea and discussed writing up a preliminary approval for the work to begin.

“We could issue a partial for some of it then amend it later,” said Commission chairman Sherman Briggs.

“For the winter I’d like to continue [from the pond] up to the girl’s softball field,” Dickerson said.

The hearing was continued until the next meeting on December 12 but the Commissioners did issue partial approval for work to begin in the mapped areas of the park.

Next, the Commission held a hearing for Joan Forte regarding the RDA she filed to upgrade the septic system at 136 Point Road.

“The property has been on the market for a short bit and already has a buyer and sell-date.  We have an existing three-bedroom dwelling.  The buyers wanted a five-bedroom house for the future,” said engineer Dave Davignon of Schneider and Associates, on behalf of Forte.

The old septic system would not be adequate to meet the needs of a larger home.

“There are some brush and trees that have to be removed before we put the tanks in,” Davignon said.

The Commission, seeing no conflicts, voted in favor of the project and issued no order of conditions.

Then, the Commissioners heard from Davignon again, this time on behalf of Jonathan and Amy DiVincenzo of 370 Delano Road.  They have filed a Notice of Intent to construct a 163-foot long timber pier, with a 20-foot gangway and anchored float.

“They’d like to get some boating access similar to their neighbors.  We performed a detailed survey and located eel grass.  We’re avoiding the eel grass, we’re avoiding going over the salt marshes,” Davignon said.  “They are fully aware they will be restricted on boat size.”

Commissioner Steve Gonsalves was concerned with the amount of beach erosion around he observed during the site walk this past weekend.

“When I went down with Norm on Saturday, I noticed a lot of erosion due to the past coastal storms we’ve had, especially Sandy.  It’s really eating at that bank,” said Gonsalves.  He suggested adding a condition that erosion-control vegetation should be planted to maintain the integrity of the coastline.

The hearing was continued until January 9 so Davignon can get approval on the project from the Waterways Department.

A public hearing scheduled for Sanford Russell, Jr. of 5 Main Street, which was continued from November 14, was continued again until the Marion Conservation Commission’s next meeting on December 12. 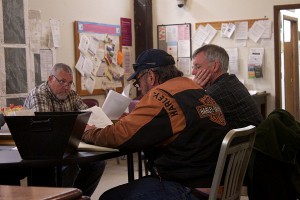