The agenda for the January 21 meeting of the Mattapoisett Zoning Board of Appeals contained only three hearings, but two of the three required plenty of time to air questions and concerns before action could be taken.

Nils Johnson, owner and innkeeper of the Inn on Shipyard Park, petitioned the board for a commercial special permit.

Flanked by his partner, Andrea Perry, and attorney Marc Deshaies, Johnson discussed the scope of renovations proposed for the porch of the historic inn.

He said the porch was difficult for patrons and waitstaff to navigate and looked shabby. Johnson said he planned to expand the porch space by 3 feet and rehabilitate the front façade.

Another part of the repairs and improvements, he explained, would be a new entranceway that would eliminate the now awkward and unsafe steps through the front door. He said the porch expansion would allow up to 10 more seats in this highly-coveted seasonal location for patrons.

Deshaies discussed bylaws that allowed the board to grant Johnson a special permit and said the overall occupancy would not change.

When ZBA Chairman Susan Akin opened up the hearing for the public comment phase, several abutters were prepared to challenge the application.

Butler, represented by Attorney Thomas Crotty, launched into all the reasons why the board couldn’t approve a special permit, citing what he believed was a state statute superseding local bylaws. However, the underlying reason for Butler’s and Smith’s objection to the plans was their concern that more seats on the porch would equate to more noise from the inn.

“My client can’t cooperate with Johnson because he hasn’t cooperated with them,” said Crotty regarding noise complaints. “This is not a legal project within the set back requirements.”

Director of Inspectional Services Andrew Bobola explained that the special permit was, in fact, appropriate for the repairs and improvements Johnson was proposing. He read from zoning bylaw 3.2 which he said clearly allowed a special permit for alternations, expansions, and renovations.

“This is a lawfully nonconforming structure,” said Bobola, noting again that a special permit was in order. “We’ve never had a challenge in the 31 years I’ve been on this board,” he said referring to special permits previously granted.

Later in the evening during the board’s deliberations, there was little resistance to the application.

One ZBA member, Mary Ann Brogan, thought that town counsel should be consulted and the hearing continued until clarity could be shed on whether or not a special permit was appropriate. The other members were more than satisfied to accept Bobola’s opinion.

Board member Ken Pacheco went further saying, “Mattapoisett has three things: Salty, Shipyard Park, and the inn…. It is vital to the community!” He went on, “Parking – park down on the wharf and, as for noise complaints, I bet ninety percent of the noise complaints have come from the Butlers.”

Directing his comments to the audience, Pacheco said, “You live beside an inn. It’s a young couple. They have their whole life ahead of them. Let them build this up.”

The board unanimously approved the special permit for Johnson.

There is an appeal process for any ZBA decision. An aggrieved party has up to 20 days to appeal to either the court or to the town clerk.

Another application taking considerable time to evaluate was a variance by Fred and Caroline Schernecker for 1 Goodspeed Island. They are currently under a purchase and sale agreement with current owner, Anthony Campbell. The contract is contingent upon the applicant being able to return the parcel to its original two buildable lot status.

Campbell had the two parcels joined as one when he purchased the properties in 2010, with the intention of building a pool and pool house on one of the lots. That project never came to pass.

Now, Schernecker is ready to buy the property and said he wanted two separate lots, explaining, “So our friends can build on the other lots.” The issue for the board was that sectioning the land into two lots would result in the vacant parcel not meeting current zoning bylaws.

Marc Deshaies, also representing Schernecker and Campbell, said, “They are simply looking to go back in time…. You have to figure out how to undo this through a variance.” He continued, “We can recreate what was there in 1984, but can’t meet current bylaws.”

Akin questioned, “Where is the hardship?” Akin referred to the hardship necessary to approve a variance. Deshaies responded, “The hardship could be the unusual shape of the lot.”

The board debated the case, but in the end, they were unable to find a hardship worthy of creating a lot unable to meet current zoning bylaws.

Akin repeated, “I have a problem seeing a hardship,” and Brogan said, “He (Campbell) should have known he was taking a chance doing it,” in reference to joining the two parcels. In the end, the board unanimously denied the request.

Earlier in the evening, the board approved a special permit to David Jones, for property located at 38 Fairhaven Road for the construction of a single-family dwelling. 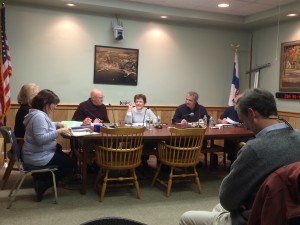