Members of the Mattapoisett Finance Committee on September 18 got a peek at the issues to appear as articles on the October 20 Fall Special Town Meeting Warrant, starting with a presentation by Highway Surveyor Barry Denham on the progress and future of the Town’s road improvement plan.

Town Meeting members will vote on the transfer of $275,000 to possibly $300,000 from the Tax Title Proceeds to the Mattapoisett Road Improvement Fund to pay for upcoming roadway projects, including roads in the center of town that Town Administrator Michael Gagne said were some of the worst in Town – namely Main Street, Water Street to North Street, Mechanic Street, and Church Street between Main Street and North Street, which have not been paved since 1979.

Finance Committee Chairman Pat Donoghue voiced concern over the sidewalk she referred to as a trip hazard on Mechanic Street near Pearl Street, specifically between the two churches. She said there have been a significant number of injuries resulting from pedestrians using the strip of sidewalk, and her greatest concern was for the elderly walking to church.

Gagne suggested marking the sidewalks in the meantime until logistics can be worked out to undergo the project so that road repair can occur seamlessly with the water main improvement.

“So at least people can see them,” said Gagne about the sidewalk edge. “So people can at least have some knowledge that there is a trip hazard there.”

Denham said 15 of the 44 miles of town road are in need of repair, and 5.75 miles are “suspect,” meaning they will eventually need repair in the foreseeable future.

Just over 14 miles, said Denham, have undergone roadwork within the last eight years.

Gagne said, as a rule of thumb, the Town’s roads should be repaved every 20 years.

“We should be paving about two miles of road per year, said Gagne referring to the Town’s roadwork plan. “We are about one point five below where we should be at this point.”

Selectmen have been doing it for years, said Gagne, and the sentiment of the Board of Selectmen is, “So let’s just make that a law so it doesn’t fall by the wayside in the future.”

Another article will be the transfer of additional funds from the Regional School Reserves to cover the cost of three additional Mattapoisett students attending Bristol County Agricultural High School. Tuition for Bristol Aggie is $18,000 per student per year.

Going further down the list of anticipated articles, the warrant will feature an article proposing an Active Duty Military Exemption that will temporarily defer property taxes for members of the military away on active duty until they return.

Property tax payments would not be reduced, simply deferred without accruing interest.

Some legal expenses from prior years will also appear on the warrant, as well as Fairhaven wastewater treatment plant charges and the appropriation of funds to the sewer system on Industrial Drive.

The plan, according to Gagne, is to “hold as much money in reserve and then appropriate as needed.”

The State has also partially funded several additional defibrillators through a grant that will cover 50 percent of the cost. Defibrillators have been added to the gymnasium in each of the schools and replaced in other locations throughout the Town. Gagne said he purchased ten for $1,000 each and expects a refund of about $5,000 from the State.

A warrant regarding dog citations and one for zoning bylaw changes pertaining to the Bay Club will also be listed as articles on the warrant.

The next meeting of the Mattapoisett Finance Committee is scheduled for September 30 at 6:30 pm in the town administrator’s office at Town Hall. 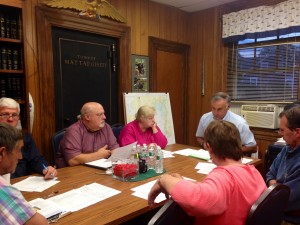