You are here: Home » News » Businesses Prevail Through ZBA Hearings

Mattapoisett’s Zoning Board of Appeals heard only two applications during the July 18 meeting, but both pushed Mattapoisett further into the 21st century than ever before. The meeting for just two applications also took a fair amount of time, nearly four hours. When everything was said and done, these businesses received what they came for – an approved variance.

The first hearing of the evening was for a variance that would allow the installation of an illuminated sign at 60-62A Fairhaven Road, the Gulf gas/convenience store owned by Vasudha LLC & Neelkanth Corp. The sign currently in place was deemed unsafe and out of date, especially when gas prices required changing. Dan Carabone of Mutual Oil described a modern digital-style as the industry standard.

The ZBA tossed out the competition angle in favor of the more compelling life safety issues associated with updating the gas prices sometimes several times per day. The new sign proposed would have the same dimensions as the current sign, but would allow remote computerized changes through digital technology.

On hand to drive home the point that this newer signage style was now the industry standard was installer Hank Ellis. Ellis said that the new sign’s illumination would allow people to read the gas prices in all types of weather and ambient light conditions and that it also included a dimming feature. But the neighbors were not amused.

Mary Kelliher, 4 Reservation Road, voiced her concern that the new digital illumination will diminish the peaceful enjoyment of her home along with other lights which illuminate the roof line of the building. She said that illuminated window signs advertising cigarette brands and other products add to the visual noise coming from the property. Kelliher said, “I don’t think it’s good for Mattapoisett.” Other neighbors questioned why this applicant would be allowed to have an illuminated sign when other businesses have been denied. They worried that this would set a precedent and pave the way for other Route 6 businesses to request the same variance. They were told that each application is reviewed on its individual merit and not preceding hearings.

After the board members debated the features and benefits of the application and pondered negative implications for the town, they voted that a reasonable hardship was proven in the form of safety and approved the application.

The second hearing was from Blue Wave LLC and their proposal for a 28-acre commercial solar field situated off Crystal Spring Road. Armed with a noise study completed by HMMH Consultants, the applicant gave line-by-line details of the project as presented by Rick Charon, engineer.

Then, Tim Johnson of HMMH gave a presentation on the noise study. Johnson’s evaluation noted that there would not be a significant change in traffic noise emanating from Interstate 195 after deforestation of the site. Therefore, residents would experience a negative impact. His study assumptions were brought into question when asked if real-time data had been used to come to these conclusions. Johnson said that his team had used worse-case scenarios in their modeling but that ‘real’ data had not been used. That did not satisfy member Colby Rottler. Rottler wanted the study to include real present-state noise level data contrasted against noise level data after deforestation.

Blue Wave’s Aidan Foley, front and center for this last local governmental hurdle, said that heretofore he had not considered this type of data to be necessary and that no other project with which his firm was associated had to consider this type of science. However, he concluded that ‘real’ data collection would prove beneficial, not only for this project, but possibly future projects in other locations, thus concurring with Rottler.

The board also heard that if granted a variance, the land use change would produce an additional $40,000 a year in tax revenue for the town.

Abutter Peter Wolski, 4 Crystal Spring Road, who has been in attendance at each and every board meeting regarding this project, was again present with questions. He asked if a surety or bond could be put in place – a ‘performance bond’. Director of Inspectional Services Andy Bobola advised the board that they could condition the permit with such a surety, but wasn’t sure if that was necessary. Bobola advised the board that the Conservation Commission would be conditioning the project to ensure that erosion controls and storm water run off would be effectively handled.

Wolski also had expressed concerns regarding a forested buffer area that was not part of Blue Wave’s lease. He had asked at the ConCom meeting if the land owner could be asked to not remove any more trees from this area since doing so would expose the deforested land to his backyard vista. Foley responded that the landowner had recently informed him that forestry activities would cease in that location for the length of the 25-year lease.

The board voted to approve the change in use with the following conditions: (1) noise studies would be conducted before and after deforestation, and Blue Wave and its partners would pay for any remedies, if required; (2) decommissioning bond totaling $225,000; and (3) signs at the site with contact information would be posted in the event residents needed to contact the company.

The next meeting of the ZBA will be announced in early August. 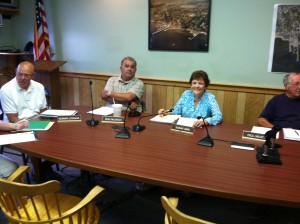