The Marion Planning Board, despite no agreement on a sum for the decommissioning escrow account, approved the Special Permit and Site Plan review for the Clean Energy Collective solar farm off Tucker lane on September 21, concluding a weeks-long contentious argument amongst board members.

After more back and forth over the reasonability of the $75,000 escrow amount proposed originally by Chairman Robert Lane, half the board accepted Lane’s latest compromise of $67,500 – a split between Lane’s $75,000 and developer Greg Carey’s previous compromise of $60,000.

Discussion began with Lane presenting three different documents for the board to review: a first draft written by Town Counsel Jon Whitten that Lane referred to as the “latest draft”; a second that contained superimposed comments made by board members Norman Hills and Jennifer Francis; and a third draft that was a rewrite by Whitten in light of Hills’ and Francis’ comments.

“The latest draft,” said Lane. “That’s going to be our baseline for conversation.”

Hills reiterated some comments he made at previous meetings regarding the scrap value of the project and how it relates to an escrow account, should the solar energy facility be abandoned in the future and the town must decommission the site. Lane stopped him immediately, citing the escrow amount as the most contentious of the issues to be saved for last.

Hills said, when it came to certain board members’ concerns over environmental impact of the project, Hills attempted to debunk their belief that solar arrays posed a risk to the environment.

Solar panels are made of steel, plastic, and solar cells, said Hills, which will not leach into the ground. There are no volatile materials, he continued, the panels do not leak gases, and any of the “unknowns” that fueled the board’s concerns at prior meetings were meaningless at this point in time.

“Unknowns are really not a factor in this discussion,” said Hills.

Moving on, Lane insisted upon including language that would require the developer provide a maintenance plan of the site, on the Special Permit, as well as the Site Plan Review approval, which Whitten suggested the board combine into one decision.

“Because, if there is no requirement for a maintenance plan,” said Lane, “somebody has to complain about it and the Town has to make an effort to get them to comply.”

Hills suggested there was no need for such a requirement, since the developer is required to upkeep the site as written in the plan record.

Lane went ahead and included notes on his copy of the draft for Whitten to include in the final draft. Meanwhile, Carey and Clean Energy Collective’s attorney, Richard Serkey, sat quietly listening to the discussion, since Lane had already announced that no further discussion outside of the board’s discussion would be permitted because the public hearing was closed during the last meeting.

Then it was time to discuss the decommissioning escrow account.

Hills asserted that the board had two different quotes to consider: the $40,000 quote from the developer’s engineer and the $50,000 quote from the board’s consulting engineer. He said he researched escrow account amounts in neighboring communities and they all averaged around those two numbers.

Lane again rejected Hills’ amounts. Board member Michael Popitz, the one tasked with seeking out quotes for decommissioning the site, disagreed with Hills. He said many of the numbers he came across were lower than what they should be, simply because many of the projects were town-operated and located on town property, so higher escrow accounts weren’t a priority for those municipalities.

“I really have no problem with the seventy-five,” said Popitz. “I think seventy-five is reasonable.”

Francis said she also researched the neighboring towns, including Dartmouth, and only two of the municipalities in her collected data went above $60,000 in their required escrow amounts. She suggested that higher arbitrary amounts might harm this and any future renewable energy projects in Marion.

“It is incumbent upon us that our decision be based on facts and … data,” said Francis, and not based on what someone’s opinion is of an amount and then seeking data to support that number, she continued.

Board member Eileen Marum shared Francis’ point of view, and she questioned the “scientific data” Lane used to come up with his $75,000, which Lane considers a compromise from his initial $100,000 to $110,000 figure.

“This is our first [solar] project (in Marion) and I don’t think we should set such an onerous bar that would discourage … industries from wanting to put solar energy in Marion,” said Marum. “A huge cash outlay could kill this project.”

Marum said she was concerned for the citizens in Marion, since they would benefit from the solar energy project.

“I want them to have a discount on their electric bill as much as possible,” Marum said.

Lane said he based his number on what the board’s engineer quoted as an amount for seven years out when the escrow amount is reviewed again, as it shall be every seven years for the duration of the project.

“If this amount of money ($75,000) is going to be an impediment to this deal, then the engineer is not doing his job,” said Lane, estimating the worth of the project at $2 million. “I’m not going to change anybody’s mind on the board,” continued Lane, “and you’re not gonna change mine.”

Hills told Lane, “Nothing in the bylaw says that we can take a value seven years out and bring it back and say this is what we need now. We can’t make this stuff up as we go along.

“Let’s do $67,500 and call it a day and move on,” Lane said. After further discussion, Lane later asked Hills, “Do you want this (the project) to die? I am strongly urging the board to accept that [amount] and move forward.”

The motion was made, seconded, Hills shook his head in visual bewilderment, and let out a begrudging ‘aye.’

The vote to approve the project was unanimous, 6-0.

In a follow-up interview, Carey said Clean Energy Collective will have to wait to receive the final decision of the board in writing before assessing where the project would go from there.

“Then, we’ll review it and make a decision from there,” Carey said.

The next meeting of the Marion Planning Board is scheduled for October 5 at 7:00 pm at the Marion Town House. 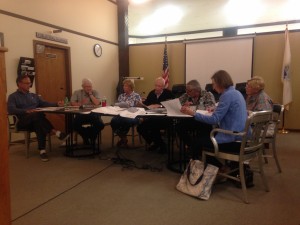