How he came to Tri-Town: He was born and raised in Mattapoisett and is now a working artist based in New Bedford.

Favorite Tri-Town spot: Point Connett. “There’s a sandbar that comes up, and when low tide rolls in, there’s like a whole new beach there and no one’s ever on it – if you’re there, maybe one other person.”

Ever seen a celebrity locally? McFee bartends part time at The Inn in Mattapoisett, and he did serve Sam Waterston, but stops short of sharing specifics. “Let them enjoy their meal, you know?”

Ryan McFee: Making Art, One Day at a Time

Ryan McFee stands at the foot of an old New Bedford building, looking up at the 50-foot-tall creation he made.

It’s a mural depicting a Civil War-era African-American soldier pridefully, defiantly holding a silver handgun with his skeleton hand crossed across his body, the other hand open below a hovering red heart. There’s a base version of the same theme in his studio, blocks away, at 1/100th of the size.

Although any observer would be wowed both by the impact of the image and the ‘how did they do that?’ factor, McFee says, “Unfortunately, it’s not my best work.”

“I really need to get back up there.” He details the ways he wants to improve the image – the hat is too small, and he’s heard from the City that they don’t like the use of the gun, and you can see that this artist’s mind never rests.

McFee grew up in Mattapoisett, and once he got to Old Rochester Regional High School, where his father Rory was a well-known coach and teacher, he had a pretty clear goal that had absolutely nothing to do with art. He was to play hockey.

“I was in the art room a lot in high school, but I really didn’t think anything of it,” he said. “I was really focused on sports.”

McFee played collegiate hockey at Suffolk, and in his senior year he took Introduction to Oil Painting as an elective. He lived above a frame shop in the North End of Boston and decided to get some of his class work framed to hang on his wall.

“So he said, ‘Do you paint?’ and I’m just saying ‘No, this is just stuff from a class,’ but he was excited. ‘You should paint this stuff around the North End!’ and he kind of kept hounding me about it, and eventually I did it.”

And when two of his paintings sold, a career was born.

“I just kind of kept doing it,” said McFee, wearing a backwards baseball hat with the logo of CCM hockey equipment emblazoned on it. “I realized, ‘This is all I want to do,’ and I’m going to do it until I can’t do it anymore.”

He’s been doing it since then and relocated from Boston to the warmth of New Bedford’s art scene.

McFee’s downtown New Bedford art studio is a work in its own right. It’s a huge space and there is something cool to look at in every direction – from finished art to handsome clutter. McFee’s work area is in a corner, and there’s so much stuff going on there that only the artist himself can completely make sense of it.

There’s a small office in the middle that feels a bit like a DJ booth, and McFee always has some good music flowing to keep the artist’s mind free.

It’s clear from looking at McFee’s studio walls or browsing through his sold works on Instagram that McFee’s style is “anything goes.” There’s realism, there’s surrealism, there’s fun, there’s dark, and overall there’s a sense of the artist at work – with an emphasis on work.

“Yeah, it’s all over the map. I don’t think you could say a couple of words that sum it up,” McFee said. “Maybe by the time I’m eighty, it’ll be narrowed down, but not now. I’m constantly trying new things.”

He keeps his studio/gallery open six days a week, and there’s a pretty steady stream of traffic. He gets a lot of young artists during the day from the UMass Dartmouth program around the corner, hanging out, using the studio as the backdrop for artistic pics and ideas. While he tries to work, he doesn’t get a whole lot done during open hours and does the majority of his work – paid and for pleasure – at night.

While McFee is comfortable painting small, detailed figures on wood or large landscapes on stretched canvas, his true love can be found writ large on the sides of buildings.

“Those are my best days, just going on a wall and painting, whether with a friend or myself,” he said. Frequently working with Todd Woodward, another ORR grad who now plies his trade in Brooklyn, he has done several large scenes at the request of local businesses or groups, and has been at the forefront of the growing local street art scene. But the bulk of his paid work comes in the form of commissioned art. Sometimes it’s friends, or friends-of-friends, sometimes it’s through social media, and sometimes it’s strangers passing by.

He gestures to the large painting on the wall high above his workspace, a very specific request from an off-the-street buyer. It’s a mountain lion defending her cubs, with various oddball details in the background that the buyer described very specifically (and eccentrically).

He shrugs. All in a day’s work for a working artist.

“What keeps me going is the commissions,” he said. “If I don’t feel creative, or if I don’t want to do something, well, I have to. So that’s that. If I was a teacher or if I was a plumber, I’d go to work to get the job done. So I try and approach it the same way.”

It’s not easy, but it’s a labor of love for sure.

“I pay the rent, but it’s month to month and it’s a struggle,” he said. “I have months where I’m a hero, and I have months where it’s ramen noodles. Sometimes you’re just like ‘Please, come in and buy something!’ I’ve got to make money off my art. You have to sell just to have a roof over your head, and that’s kind of a challenge.” 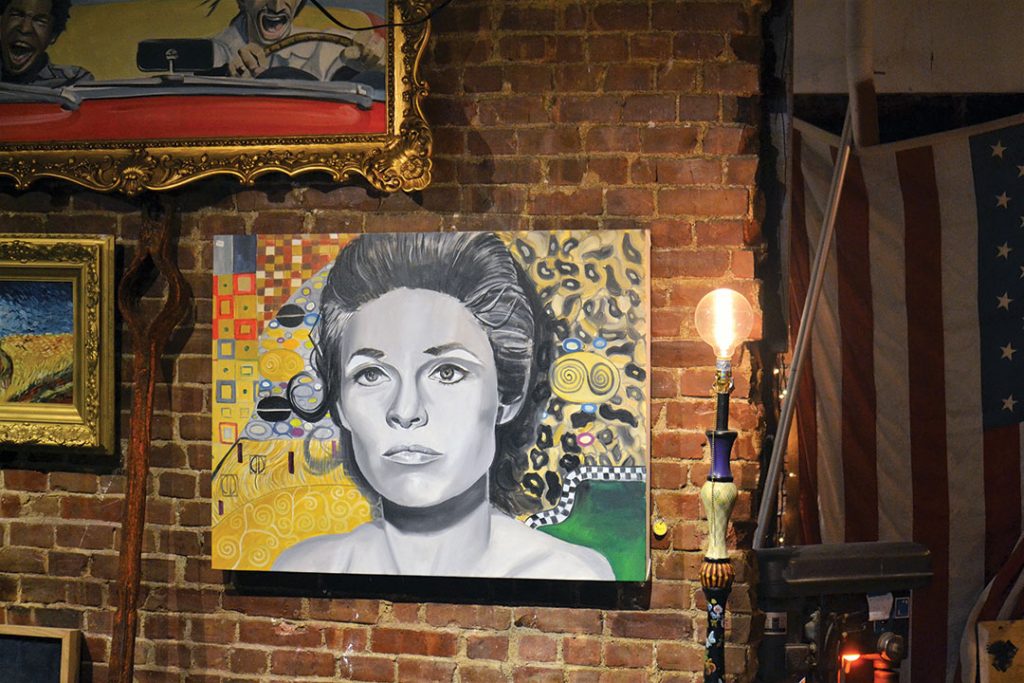 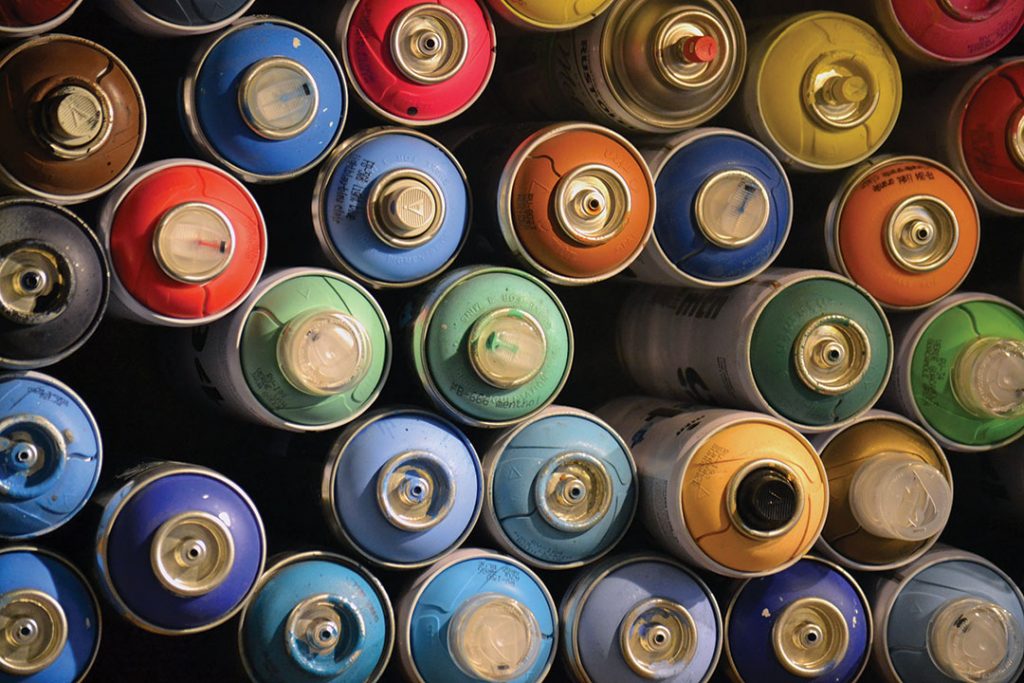 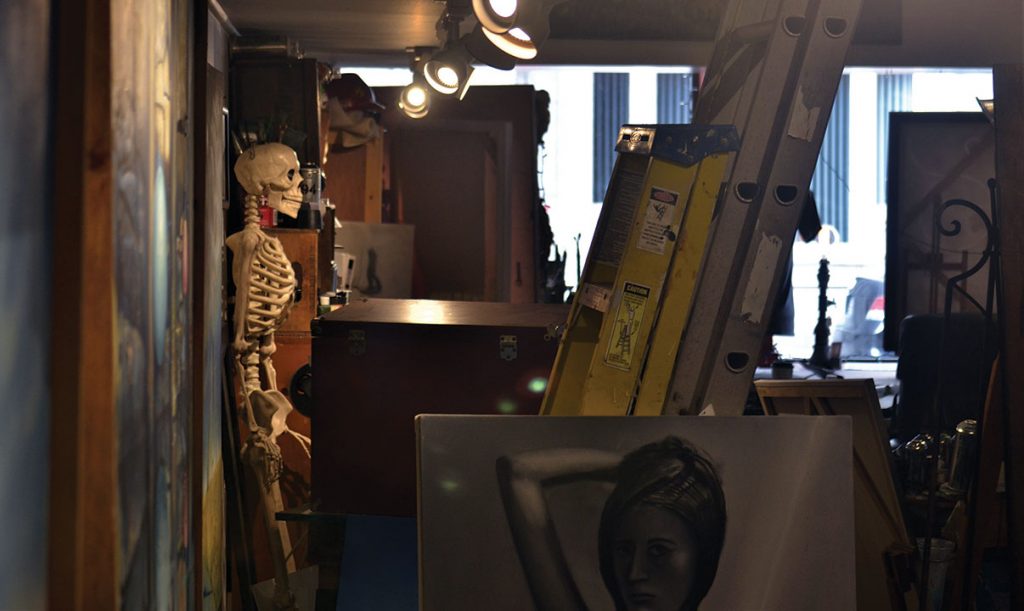