More than 50 firefighters from Marion, Mattapoisett and Rochester participated in a live training session on Rounseville Road Sunday morning, March 24, at a former two-story residence that is set to be demolished.

“It’s the best training we can supply because we can make it the most realistic,” Rochester Fire Chief Scott Weigel said.

Weigel said that they’ve been able to make use of the structure for about a month now, and that Sunday’s burn is the last stage of several practice sessions that have taken place there. On Sunday, crews lit multiple fires with hay bales and practiced different fire control and search and rescue scenarios called “evolutions” in the burning, smoke-filled building.

“We try to make the most use of the building that we can,” Weigel said. “We’ve been very lucky to have it.”

He also added that at least four or five participants from each town’s departments were either in the fire academy or had recently completed it.

“It’s great training for them,” Weigel said. “This is the time to find out if they’re not comfortable doing it.”

The part of Rounseville Road where the session took place was temporarily blocked to through traffic by Rochester police, and Rochester EMTs were on hand to ensure the crew’s safety. Several onlookers from the neighborhood gathered to watch the firefighters in action.

Weigel said that the departments get this opportunity to train once a year if they are offered a building. Oftentimes, when homes are scheduled to be demolished, the fire department is notified so that it can utilize them for these practices.

Weigel explained that several steps must be taken, such as checking for asbestos, before a burn on the house can take place, and that the departments need to apply for various permits in order to proceed.

“We want to keep everything as safe as we can,” Weigel said. 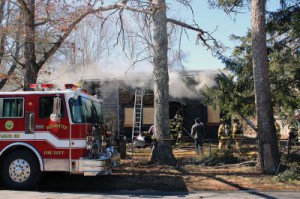