You are here: Home » Features » Tri-Town Beats the Heat

Summer of 2012 started with a bang, as parts of New England experienced the first official heat wave of the season.  Temperatures hit the mid 90s on Wednesday, June 20, which also marked the summer solstice, and continued straight through Friday, leaving people clamoring for relief.

“We’ve been inundated with a lot of calls,” said Christine Hiller of Hiller Fuels in Marion, which offers air conditioning repair and maintenance.  “A lot of them are for frozen coils.  They freeze when people turn on their units too high the first time.  We’ve also fixed a few condensers and broken control panels,” she said.

Despite the intense heat, the Mattapoisett Police said that there haven’t been any reported incidents related to the hot weather.  “We haven’t had any outstanding emergencies.  No medical situations or electric failures,” said Officer Mitchell Suzan.

The Tri-Town offers no shortage of options for folks to get their cool on, from shady groves of trees, to the beaches, to indulgence in chilly treats (hopefully before they melt).

“We’ve served lots of ice cream,” said Liz Ackerman of the Oxford Creamery in Mattapoisett.  “If the sun is out, we’re busy.”

In the last few days, the Creamery has seen a strong influx of customers in the afternoon and early evening.

“We’ve done a lot of take out for people going back to the beach or the pool.  Business is steady when it’s hot because people don’t want to cook,” Ackerman said.

According to meteorologists, this summer could be one of the hottest on record, with many predicting it may stretch into the early part of the autumn.  Just in case this heat wave wasn’t our last, here are some tips from the Massachusetts Health and Human Services department on how to stay safe and cool this summer: 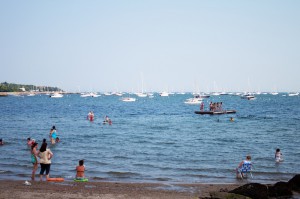