You are here: Home » Features » The Early Days of Rochester Police and Fire

If you called the Rochester Police some time in the 1960s, chances are Officer Joseph Chamberlain would pull up in his family sedan, and occasionally, he was accompanied by his young son Bill. There were no radios, no way to call for backup if needed – heck, there wasn’t even a police station at the time.

Those were the simpler days of life in Rochester, a time gone by when a one-officer emergency response was all that was needed. There was no police academy education required and no uniforms. Just a man with a badge, a duty belt, and a .357 Magnum hanging low on his side.

During a presentation about the history of the Rochester Police and Fire on September 16, retired Sergeant Bill Chamberlain accepted a citation from Maria Connor, special assistant to Senator Michael Rodrigues, on behalf of the Rochester Police Department. The crowd begged Chamberlain to stay at the front of the East Rochester Congregational Church altar and tell them some stories from his many years on the force.

Chamberlain went straight back to his childhood to a time when he climbed into the family’s Ford Galaxy with his father who was responding to a shooting incident called in, literally, to his home phone.

“There were many times that he would go out on a call and I would go,” said Chamberlain. “That would be unheard of today.”

Chamberlain’s father would respond to whatever type of call came in, and one night there was a shooting reported at a residence. Chamberlain Senior was called to investigate. Upon arrival, Officer Chamberlain knocked out the two front lights, knocked on the door, and entered the home to find a man who had accidentally shot himself dead.

“As traumatic as that may be for a young child, I grew up with that,” Chamberlain said. “And I just understood. I knew what passing away meant.”

Chamberlain recalled the days when Rochester was once a mecca of sorts for stolen vehicles – about 100 stolen vehicles found during a year – which was pretty much the extent of the regular riff-raff that went down in town, alongside the occasional escaped livestock that police would chase after. (Which still continues today, commented Chamberlain).

In the 1970s when drugs started appearing on the Rochester scene, Chamberlain recalled the police starting to train officers on identifying drugs, and Officer Chamberlain asked his college-age son to “help him out” with some marijuana, since the officers had no idea what marijuana looked or smelled like.

Red-faced, Chamberlain admitted he bought a baggie of pot to give to his father.

“And they did use it,” said Chamberlain, which elicited laughter. “Hey, if they want to arrest me for it, so be it…”

Betty Beaulieu of the Rochester Historical Society compiled years and years of Rochester Police and Fire history to share, going all the way back to the very first police officer/constable Robert C. Randall, who served from 1857 to 1882. No money was appropriated for any emergency response in those days, and in 1890 a forest fire line item was added that paid $1.60 per man. Historical Society member Connie Eshbach presented that information to an audience of roughly 30 people.

Town Meeting voted to appropriate funding in 1910 to purchase fire extinguishers for firefighters, but it wasn’t until the 1940s when the Town actually created a budget for the Fire Department and appointed its first fire chief, Henry B. Hartley, who served until 1954. The first official police chief was appointed in 1947, William D. Jenkins.

“They all wore two hats,” Eshbach said. “It depended on the call which one they put on.”

‘Police stations’ and their locations varied over the years, such as from a small room at Town Hall, to the chief’s home, to a trailer beside the fire station, to the current building on Dexter Road.

In the 1970s, the push for more police officers picked up steam, said Eshbach, and the town finally had its first police cruiser in 1978.

“It was a hard, long slag, I think, to get a full-time force,” said Eshbach. “Rochester has been well served by both of its departments.” 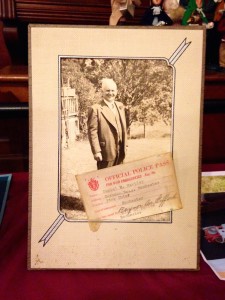 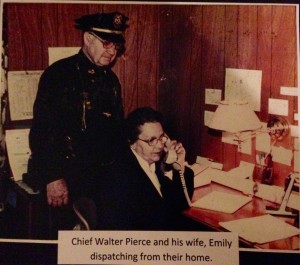 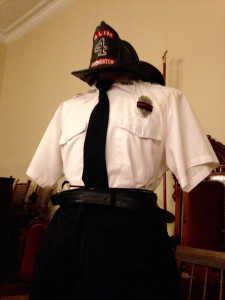 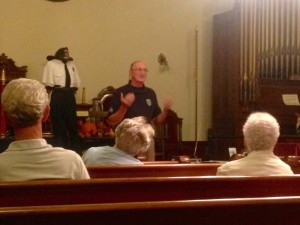 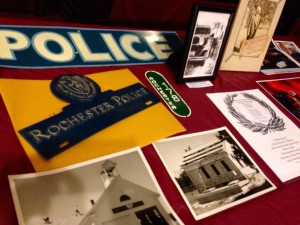 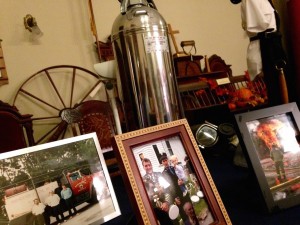