You are here: Home » Features » The Belted Kingfisher

The kingfisher gets a ‘belted’ title from the wide blue belt of plumage around its waist. The royal title of king, however, may come from a regal crest of ornate quills that adorn its large head like a crown. Taxonomy of the title ‘fisher’ comes from its spectacular performance of raptorial predation, diving into the water after fish.

This spectacular performance entertains us from the back porch of our seaside overview on Little Bay. From a wooden fence post there, a kingfisher regularly patrols and surveys his estuary with the eye of a hawk. Recently in late Autumn, a frantic flock of circling gulls bore witness to its astute ‘kingfishing’, diving down to scoop up bite-size minnows driven to the surface of the water by a school of bluefish.

The belligerent kingfisher, not to be outdone, launches his flight like a jetfighter plane thrust from the catapult of an aircraft carrier. Propelled outward into an up and down undulation of wing beats towards its objective, it simultaneously emits a rickety-rack warning call that sounds like the rasping rattle of a rusty fishing reel. Then, briefly suspended in a hovercraft position about twenty feet above the water, it dives down towards its target. When it hits the water, as in my illustration, a translucent third eyelid called a nictitating membrane comes down to shield and protect the eyes.

Like an osprey, it can compensate its vision for underwater refraction and reflection into an accurate downward thrust. And, like a cormorant, it can maneuver its wings under water and swim back to the surface to fly away with its prey.

Kingfishers are uniquely and extraordinarily gifted to be cavity nesters for privacy and solitude. Both parents drill a tunnel hole from several feet up to even ten feet horizontally or slightly sloping upward into an earthy bank. There, they then carve out a chamber for laying eggs, far from the maddening crowd.

A characteristic distinctive from most other birds is that the female is even more colorful than the male, with a bright chestnut belt around the belly to both sides and flanks.

With the recent sudden arrival of winter weather, kingfishers may migrate short distances south, but only far enough to fish in open, unfrozen water. The female, however, might stray and often travels a little bit further, perhaps just to be different.

To end my simulcast of bird watching and the kingfisher’s unique and aerobatic performance, I hope to have painted a lasting illustrious impression with you as a reader. But for now, let me leave you at this observation post from one seasonal celestial station of the zodiac on Little Bay, until returning with the next report on the snowy owl. 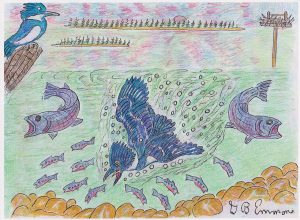