You are here: Home » Features » Students Take Their Education Global

Thanks to technology, information is now ubiquitous. This presents a welcome challenge to educators who are looking to incorporate the use of technology more directly in the classroom.

A few months ago, Kevin Tavares and his fourth graders at Old Hammondtown School in Mattapoisett built a website to share what they were learning with the rest of the world. Mr. T, as the kids call him, installed a location tracking widget on the page that assigns a red dot to the country of each visitor.

“They’ve been studying primarily North America, but the kids wanted to get dots from all over the world,” he said.

In the first 24 hours, their site received 124 visits from 16 different countries. As well as being marked on a map online, Tavares has pinned each location on a large global map at the front of his classroom, complete with a line of clocks hanging above, each marking time in different places around the world.

The quest now became to get website hits from all seven continents. That’s right, all seven.

“One night I came upon a website of U.S. scientists who are working in Antarctica, so I sent an email out,” Tavares said.

He did get an email back, but as for getting the dot on the map, he was out of luck. The scientists in Antarctica use satellite Internet, and the signal first makes landfall in Florida.

He eventually got in contact with Amber Lancaster, who is a scientist working with PolarTREC (Teachers and Researchers Exploring and Collaborating), which offers teachers and students opportunities to participate in hands-on field researching projects in the polar regions of the world.

The result was the opportunity for his fourth graders to take part in a live webinar, where two scientists in Greenland would teach them about their work and equipment.  People from Pennsylvania, New Jersey, West Virginia and Canada joined the students at Old Hammondtown, virtually, as scientists Tim Spuck and Kyle Krabill webcasted from Kangerlussauq, Greenland, near the Russell Glacier.

“We work six days a week. We don’t always know what day it is,” Krabill joked.

He and Spuck detailed their daily lives on the world’s largest island, from the bigger, slower mosquitoes that fly around in warmer weather to the unexpectedly generous amount of Thai food that is available to them.

They then explained the work they did, which focuses on studying the current changes in the Earth’s cryosphere, which includes snow, glaciers, permafrost, and sea ice due to rising average temperatures around the world.

“What’s the first thing that happens when your refrigerator breaks? Your ice cream melts,” said Spuck, when telling the students why it’s important to study Earth’s polar regions.  They used a slide show to provide the students a glimpse of the equipment they use and the landscapes they travel.

At the end of the day, Tavares was very pleased.

“I think it went great.  It exposes the students to different elements of science. It’s really about opening their eyes to it,” he said.

Judging by the reactions of his students, he succeeded.

“I like that you got to see them and didn’t just listen to their voices.  It was interesting,” said Ali Moniz.

“My favorite part was when they talked about the different things they used to take samples,” said Zoe Davis. “But watching this, it got me more interested in science.”

This webinar was only part of Tavares’ effort to incorporate the responsible use of technology and the Internet to help educate his students. In the next few weeks, his class will Skype with a scientist in Chile who was working in Antarctica when Tavares first made contact with the team down there.

Mr. T also signed his class up for the QuadBlogging program, where over the next 10 weeks, his students will have the opportunity to teach peers in England and New Zealand about school and life in Mattapoisett, and learn from those international peers about their home countries.

For more information about what Mr. Tavares’ fourth graders are up to at Old Hammondtown School, check out their class website:  http://mrtohs.weebly.com 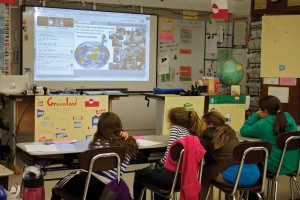