The Sippican Historical Society has done it again. They found another fascinating Marion resident to host another in the society’s series of history-based lectures on February 20 at the Marion Music Hall.

This time, Dr. Kirtland Mead, Ph.D., from Massachusetts Institute of Technology presented “Why Germany Flew off the Rails, and How Her History Could Have Been Different.”

Germany’s tumultuous history goes way back to the tenth century as the Roman Empire was still expanding, and medieval Germany was a mosaic of tiny autonomous countries, all of them warring and producing different monetary currencies – a chaotic, fragmented region, and its political development frozen for centuries.

Mead’s involvement with Germany began when he made a last-minute decision during his final year of college to travel to Berlin, on a whim he said.

What resulted was a back and forth relationship with the country that spanned over 40 years.

“Most Americans do not know Germany at all,” said Mead.

Mead started with explaining how the Roman Rhineland was the core of Germany’s economy during medieval times, which was not ideal, stating that the region would have benefited if the state was run by secular dukes who would have unified the region, rather than by the Church which perpetuated its division.

“Instead of unifying, like France or England, Germany and the Holy Roman Empire fragmented (1250-1400).”

Things were good – until the Reformation, said Mead, and then cited “the biggest conflict that most Americans never heard of,” as the Thirty Years War of 1618-1648.

“The Thirty Years War runs like a black line through the history of Germany,” said Mead. Thirty percent of the population was killed. Recovery took over a century. “But when it did [recover], you had another Golden Age.

Mead posed questions, such as, was Germany better off fragmented? Could orderliness be overdone, and was that Germany’s problem?

Napoleon conquered most of Germany, simplifying the map and curtailing the chaos for some time, until 1870-1910, when jingoism, excessive militarism, and incompetent leadership drove Germany to war in 1914. Following World War I, Germany descended into revolution when fascists, communists, and Nazis battled for control over the country. And of course, after WWII, total collapse.

“But there was a silver lining to that cloud,” said Mead. “Total destruction finally enabled Germany to put her terrible past behind her.”

And now, in present times, Germany has begun to dominate Europe once again, and Mead cited economic strength and stability as a reason.

“So it’s not done,” said Mead. “We’re not finished … Germany is so powerful, so able, so strong, so organized.” He continued, “But there, in the end, you’ve got a problem.”

Mead said other countries in the European Union are nervous about Germany’s power, its domination of the economy, and its geographic location, centralized in the middle of the EU.

“Will Germany wind up owning the south of Europe?” asked Mead. “It’s not as though there’s a happy ending here. The story’s not over. We don’t know what’s going to happen next.”

Mead proposed an alternate history for Germany, which very well may have led up to the same situation in which Germany is placed now.

“History suggests that you want to keep your eye on that,” said Mead in an ominous tone.

The Historical Society has invited Mead to return for another lecture on France during the summer. The next lecture the society has planned will be on March 7, “Turmoil and Transition in Boston,” presented by Larry DiCara. The presentation is free and will take place at 7:00 pm at the Marion Music Hall. 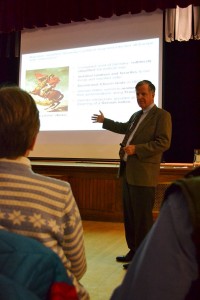