With a controversial item on tap for the May 13 Town Meeting and a crowded ballot in the May 17 election, Marion continues to be the hottest political ticket in the Tri-Town.

In turn, the League of Women Voters’ Marion Candidates’ Night is the place to be on Wednesday, May 1, 7:00 pm. I’ll be at the Music Hall to hear from upward of 16 hopefuls – incumbents and challengers – as they vie for contested seats up and down the ballot.

“It’s as significant an event as ever this year because of the big number of candidates on the ballot,” said LWV organizer Tinker Saltonstall. “The majority of them are running in contested races.”

Incumbent Selectman John Henry will have to fend off two challengers to hold on to his seat, as both William Dale Jones and Edwin North have filed papers for the three-year term. Each candidate will have three minutes to make an opening presentation before fielding questions from the crowd. If they are still standing after what could be a tough Q&A session, the candidates get an opportunity to make a final one-minute appeal for Marion residents’ votes.

“The format has always been fair and nonpartisan, and we’re on target to adhere to that,” Saltonstall said. “The aim is for the candidates to hopefully inform all of the citizens who attend about their opinions on the issues.”

The program demands an equitable, alert and level-headed moderator. Luckily, Susan Grosart – longtime LWV member, former School Committee Chairman, and Marion activist – is just that. And she will be busy.

Two candidates are running for one Board of Health seat: Albin R. Johnson III and Kerry A. Reynolds.

The Planning Board has two spots available for three contenders: incumbent Sherman Briggs and challengers Jerry “Rico” Ferrari and Norman Hills. Interestingly, Hills has served on the Energy Management Committee, a body that has butted heads with Briggs’ Planning Board over the solar bylaw in recent months.

Michelle Ouellette and Linda A. Harju are running to replace Tom Shire on the Old Rochester Regional School Committee.

That’s quite a popular dance card. So popular, in fact, that Saltonstall said one feature of the long-running event had to be dropped to make room for all of the candidates. Discussion of the key articles on the Town Meeting warrant will not take place on May 1. Instead, ORCTV Executive Director Don Cuddy will air a taped special with Marion officials examining those items bearing the biggest potential financial impact.

In the meantime, the people responsible for implementing those policies will tell you what they think and give you something to think about before casting your ballot on May 17. What better way to spend a Wednesday night? The Wanderer will see you there. 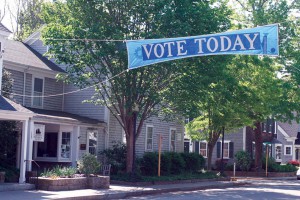