You are here: Home » Features » For the Love of Books…

When 5-year old Kennedy Zussy of Marion overheard her parents talking about how some New Bedford schools don’t have a school library for students, Kennedy found it unacceptable. No books? How can kids be smart if they don’t have books, the little girl wondered.

“All year, they had, like, six books on the shelf in the ‘library,’” said Kennedy, reflecting upon the urgency she felt to take action; for little Kennedy is an avid reader who loves books, loves reading with her parents, and loves learning to read. Her favorite book is Disney’s Tarzan, and any Disney book for that matter.

Kennedy’s mother, Shannon Zussy, admitted that she was not as enthusiastic as Kennedy in the beginning. With a toddler and her job, she wasn’t quite feeling up to the task of driving home the need to the community and calling on people for books. She wasn’t quite up to driving to pick books up, either, and lugging boxes of books to whatever schools needed them.

But Kennedy begged her mother to help her reach a goal of collecting 100 new and used books to donate to the New Bedford Public Schools. She begged, and begged, and continued to beg until her mom gave in, created a Facebook page, and started sending the word out to family and friends.

That was back in February.

Within the first two weeks, Kennedy had totally surpassed her modest goal of 100 books; instead, she collected 915 books, including some she bought with her own allowance. By June, Kennedy ended up with a whopping total of 1,342 books.

Kennedy presented the books to the New Bedford School Department in June and was presented with a certificate of appreciation from the New Bedford Public Schools Department. New Bedford City Counselor Steve Martins was impressed by Kennedy’s dedication to her fellow young readers, and he invited Kennedy and her family to the City Council Chambers to present her with a citation for her good work.

Kennedy didn’t stop there, though. She started collecting even more books over the summer, and as of Monday, August 24, Kennedy had already collected another 487 books – just about halfway to her second goal of reaching another 1,000 books.

However, she better move fast, because, as is the case with most 5-year-old philanthropists, her attention span already has her thinking ahead to the next cause Kennedy wants to take on.

“When I’m bored with collecting books, I’m going to do animal shelters,” a confidant Kennedy said, brushing her long light brown hair away from her face and off her shoulders. “I’m going to collect stuff like blankets, pillows, food … because most animals don’t have any shelter.”

Establishing school libraries for kids without books: check. Poor shelter animals without blankets or pillows, do not despair. Kennedy Zussy will soon be there.

If you would like to donate any used or new books before Kennedy moves onto the poor shelter animals, Kennedy is collecting books for preschool up to high school age level. You can contact Shannon Zussy via email at szussy82@gmail.com, or you can go to Kennedy’s project’s Facebook event page, “Kennedys Love for Reading 2.”

“We are very proud of her,” said Shannon. “She’s always had a big heart.”

Books make kids smarter, Kennedy firmly believes. She imagines how much smarter and happier other kids will be with 2,000 books. Now, about those animal shelter supplies…. 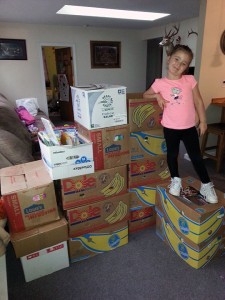