You are here: Home » Features » Economic Depression and Recovery – Circa 1840s

What does the economic depression of the late 1840s, the Gold Rush, and the development of high-speed clipper ships have to do with Mattapoisett? Well, just about everything as we learned from Seth Mendell during his talk at the end of the annual meeting of the Mattapoisett Historical Society.

Mattapoisett’s Historical Society Museum held its annual meeting on September 21, at which it proudly displayed two Clifford Ashley paintings flanking the Ashley map mural. Museum Curator Elizabeth Hutchison reported that during this past season, they have hosted art shows, given historical talks and walks (by Seth Mendell), partnered with local schools providing educational programs, and reached out to other museums in research projects. Hutchison is currently looking for more volunteers to help with the cataloging of their vast textiles collection. Though their fiscal year ends in December, Treasurer Maureen McCarthy reported cash assets to date as $21,375. Then, Mendell took the podium to share new insights into our rich local history.

The Depression of the late 1840s came at a time when the town was bustling with shipbuilding and numerous supporting business activities. Once again, Mendell transported us to a time when ship builders lined Water Street from stem to stern, where the air was scented with fresh-cut lumber, tar, linseed oil, paint and smoke while the ambient sounds blended into a symphony of bass notes from hammers and mallets and high notes from ships’ bells as they entered the harbor. Then, rather abruptly it seemed to just stop.

Demand for large whaling ships and people to invest in the cargoes they would haul back home withered away. The entire whaling industry stalled, sending a ripple out through every other type of business that had been enjoying the ride. Taverns, merchants, even doctors and lawyers felt the impact of an economy adrift.

Volumes have been written about what brought this to bear, but in simple terms, over-speculation and complete dependence on European markets conspired, along with the collapse of two banks in London, to bring down not only that economy but the American economy as well.

While whale oil was still a major commodity at that time, Mendell explained, it had become increasingly harder to fill large whaling ships with oil due to over-fishing. Ships were dispatched to oceans in the Pacific and Arctic in order to pursue whales surviving the onslaught. Those ships had to be larger and required greater overall investment.

And when those ships finally returned to ports along the northeastern coast after years at sea, they brought back the news that gold had been discovered in the West. That bit of gossip spread like wildfire across an area where people were struggling financially. They heard, as Mendell relayed, that all you had to do was “pick up the gold from the ground, fill your bags with nuggets, it was there for the taking.” The fever spread.

With nothing to lose and everything to gain, men from every walk of life jumped at the chance to bring home riches from the California territory. From ministers to carpenters, from doctors to despots, those filled with the dream of vast wealth headed west. Mattapoisett saw 160 men follow that siren call. From New Bedford, 800 men and boys fled west, while Nantucket lost a fourth of its male population.

The Mattapoisett contingent formed themselves into two companies. One was named the Mattapoisett and Bridgewater Mining Company and the other the Mechanical Exposition. They purchased or chartered a whaling ship complete with captain and crew and sailed for San Francisco. It is estimated, Mendell said, that 1,000 men departed from the eastern seaboard bound for the lawless western territories.

California was not a state. The law of the land was a six-shooter. As the men from the east landed in the west, they found criminals of every sort waiting to fleece them of all their assets, including the very clothes on their back. But, of course, Mendell reminded us, gold was not easily found. The few men who were able to purchase supplies and head into the Sierra Nevada mountains seeking gold – those who had not lost everything to the bandits waiting for them to disembark in San Francisco – lost everything once they got to the mining fields. Less than one percent ever found any gold at all. Those who could staggered back home, while others never returned.

There were a few enterprising men who found a way to not only survive once they arrived out west, but to prosper. One such person was Dr. Samuel Merritt, formerly of Plymouth. A physician by training, he too had headed west in search of gold. He, too, dragged himself back to the western coastline from the mountains leaving behind all dreams of getting rich easily from gold mining. However, what he observed in that roughneck city of San Francisco was this: The merchants and service providers supporting the miners were doing all right. Merritt was no fool. “He hung out a shingle,” Mendell told us. People needing medical attention came. Within the first year, he earned an astonishing $40,000.

Building on that success, Merritt became a successful merchant. He purchased ships and sent them north for lumber and south for fresh fruits. Both endeavors earned him vast sums of money. He purchased land across the bay from San Francisco in what is today Oakland. California had by then become a state with masses migrating west. Land became more valuable than gold. Today, well-known institutions, such as Merritt College and Samuel Merritt Hospital, bear his name such was his impact on the area.

Concurrent with these events, faster ships were needed to bring people and goods from the east coast to the west. The trans-continental railroad was yet to be built. Thus, Mendell shared, the era of the swift clipper ships began. These ships were much longer and with a more narrow profile than their predecessors the whaling ships. They were designed for speed.

Mattapoisett’s shipwrights got to work. Orders for clipper ships came in to these expert builders. In the next eight years, as the American economy steadied itself and began to recover, Mattapoisett’s ship builders turned out 36 clipper ships. “They were monstrous,” Mendell exclaimed. Reaching 240 feet in length, they would have poked their way onto Water Street from Shipyard Park. Yes, the recovery had come, but the only surviving shipbuilders in Mattapoisett were Barstow, Holmes and Meiggs. With time and changing demands of people, the once-thriving boat building industry would slowly drift away as if on an outgoing tide, never to return.

The museum is now open by appointment only, but Hutchison said that they will hold a Fall Family Festival on October 4 at 2:00 pm, an event during the Thanksgiving holiday, and be open with special hours and activities throughout the Christmas season.

For more information or how you can volunteer at the museum, contact Museum Curator Elizabeth Hutchison through www.mattapoisetthistoricalsociety.org or by calling 508-758-2844. 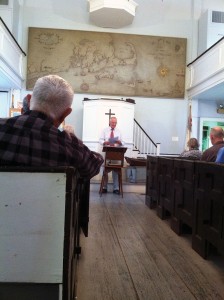