You are here: Home » Features » After Four Stormy Decades, Lawrence Retires His Plow

If you ever wondered what type of person spends his entire adult life’s worth of winter storms plowing Rochester’s roads, meet Glenn Lawrence.

“The plowing and sanding, I’ve been doing that since I was eighteen,” Lawrence said with a modest shrug. “I’m sixty-two now.”

Glenn’s last day as a member of the Rochester Highway Department was Friday, October 13, and his wife, Laurie, posted about it in a couple of Facebook groups. The response was quick and refreshing, as folks from town and beyond weighed in to appreciate Lawrence’s service.

“I don’t do that Facebook thing. I guess it’s not my era or whatever,” Lawrence said. “But she does, and the amount of people who came forward to say nice things and thank me for my work, that was awesome. That really humbled me.”

Lawrence has seen a lot as a town EMT, firefighter, and a member of the Highway Department for the last 10 years. He’s proud to have been part of a great group, and the plowing and sanding team – usually about a dozen people – was his life for decades.

It was a hard job, and one of the reasons the Facebook outpouring meant so much was because he took it so seriously.

“You know, we really tried to do a great job, and succeeded for the most part,” he said. “The few that throw the shovels at you when you back into their mailbox, stuff like that, they kind of stand out because you think everybody feels that way. But it’s really not.

“I think maybe a lot of people in this town don’t realize that the guys that are out there doing plowing and sanding, those are the same guys you’re going to see when you have a stroke or a fire or any problem. They’re your firemen, your EMTs.”

His wife Laurie, who runs her own business, has been by his side since she was 18, and she was happy to see her husband get some recognition.

The Lawrences have made their Rochester plot a home in more ways than one. There’s a version of the American Dream that seems to fit the town – work hard, plant roots, and watch them grow – and the Lawrences are living it.

Building their home from a kit, they raised three kids and became an integral part of the community over three decades together. Their daughter Sarah was married in their makeshift function hall – an airplane hangar that houses Glenn’s beloved 1940 two-seater and a small home church where the Lawrences and others gather for bible study.

As they near retirement (not there yet for either of them, as they continue to run their own business), it’s clear they’ve built something strong and special.

So, why was this the last season for the lifelong plowman?

“And also,” his wife interjected, “I really kind of pushed him toward it. You know, when we looked at it at the start, it was get your ten years in, and so we stuck to that plan. The plowing, the not sleeping, the going two or three days straight … it’s not healthy for you, and that’s the most important thing. It’s exhausting.”

But the camaraderie and the honor of the duty have always offset the negative. Lawrence credited Jeff Eldridge of the Highway Department with setting a great tone.

“He grew up in town too, so he has that special heart I have, we all have,” he said. “He’s phenomenal. You can’t imagine a better boss. You never look at him like he’s your superior. He’s right there with you.

“We really are close-knit, the whole team. In the winter time, you’re with your partners more than you are with your spouse. It’s that much, in bad winters it is. You’re very rarely home, and when you are, it’s to get some shuteye so you’re not a zombie, and then you’re right back out there. We’ve got each other’s back, and not just plowing. That’s the tough part to be away from.

Lawrence will enjoy more time with his wife and family, and with his red hand-propped plane he calls “my baby, the only thing that keeps me sane sometimes.”

And when the first storm of the season finally does come crawling across the weather map and reaches the skies above Rochester, Laurie said she will be ready.

“I’ll do something,” she said, grinning on a mild fall day from her front porch. “I’m going to make him go in the spa, or cook him some cookies, keep him distracted.”

“Yeah,” Glenn agreed. “It’ll be weird for me to be home, especially hearing the guys out there – but to miss it? Hanging with the guys, maybe.

The thought trails off as he gazes off into his green lawn, long dirt driveway leading to the clean black hardtop ahead. 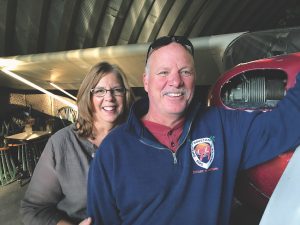