As winter sports came to a close in the New England Preparatory School Athletic Council, the Tabor Academy teams had great success in tournaments and finished their seasons off well.

The Boys’ and Girls’ Varsity Squash teams competed in the Interscholastics. The boys finished their season with a 4-10 record while the girls had a 1-9 record.

The Boys’ Basketball team defeated Trinity Pawling 69-62 to make it to the semi-final game at the Williston Northampton School where they lost 66-51. The team had a record of 18-7-0.

The Girls’ Basketball team had an impressive run after defeating Marianapolis School with a score of 66-38 and making it to the semi-finals where they defeated the Rivers School 59-40. The team ultimately made it to the Championship game against Nobles and lost 39-48. The team had a stellar record this season: 22-3-0.

The Girls’ Varsity Hockey team lost to Pomfret in an exciting game that went in to double overtime but had an impressive season regardless with a record of 18-5-1.

The Boys’ Hockey Team finished their season with a 14-11-4 record.

The Wrestling team, coached by Conan Leary, finished their season with a remarkable 20-1 record.

With winter sports having come to a close, the spring season will kick into full swing after spring break. The Baseball, Lacrosse, and Crew teams have gone on spring training trips to get ready for the season.

There will be many games, meets, and matches to attend with the wide variety of sports offered in the spring: Baseball, Crew, Competition Dance, Golf, Lacrosse, Sailing, Softball, Tabor Boy, Tennis, and Track and Field. Team schedules are available on The Wanderer website at www.wanderer.com. 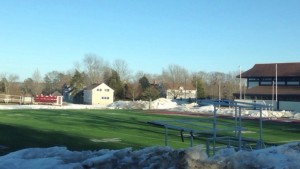