You are here: Home » News » Harbormaster a Hot Topic

On Monday, November 19, the Town of Mattapoisett held a Special Fall Town Meeting at ORR.  About 200 residents attended the meeting, voting in favor of 11 of the 12 articles on the Warrant.

In Article 2, a Home Rule Petition, the Town of Mattapoisett would contribute 50% of cost for health insurance premiums for public employees, which marks a 25% reduction.

“This particular article is a watermark in collective bargaining for both school and non-school negotiations,” said Town Administrator Mike Gagne.

Previously, the town covered 75% of premiums, but due to the rise of health insurance costs, the Town felt it necessary to reduce their contribution.  The resulting agreement would also allow the town to better manage funding for future public employees.

Article 3 was another Home Rule Petition regarding the treatment and role of the town Harbormaster, but before proceeding with discussion, the Board of Selectmen felt it prudent to offer some clarity regarding the specifics of the article.

“I don’t think I’ve seen an article on a Town Warrant with as much confusion and misinformation surrounding it,” said Board of Selectmen member Paul Silva.

If approved by the Commonwealth, the Board of Selectmen would be able to work with the Harbormaster to better create improvements for the waterfront and to close the gap of communication and accountability between the two.

The current law prevents the Harbormaster from being removed, except in cases of negligence or impropriety, the disciplinary action for which is taken upon by the Commonwealth.

The change in the law would also allow for the Town of Mattapoisett to work more closely with the Harbormaster and would give them authority to discipline the individual, if needed.  It would not allow the Town to directly appoint a Harbormaster, but rather let the Town hold that position to the same standards as the rest of the town department heads.  The passage of the article would not authorize the town to hire a full- or part-time Harbormaster.

“We’re fortunate that we have a Harbormaster who is a team player.  However, Horace [Field] will not be in that position forever,” said Silva.

During the discussion, however, many residents felt that the article was unnecessary and redundant because, though distant, there is already a mechanism in place to dismiss the Harbormaster if deemed appropriate.  Others were concerned because the Marine Advisory Board was not consulted during the drafting of the petition.  As a result, a motion to indefinitely postpone the article was made, but was defeated 109-70.

Selectman Collyer said he understood where the concern and misinformation came from but didn’t believe the article should be postponed.

“This isn’t about whether it’s full-time or part-time.  By postponing this, what this will do is prevent us from holding this position to the same performance standard,” Collyer said.  “This article only allows us to hold [the Harbormaster] accountable for his or her job.”

Silva of the Board of Selectmen explained that the article should be passed at the Special Town Meeting because the entire process can last up to a year.

As the discussion continued, resident Carlos Desouza recommended adding in language that would specify the position as part-time employment.  That was quickly countered by one of Mattapoisett’s more seasoned political personalities.

“If this becomes a [state] statute that this becomes a Harbormaster position, this position would by law be part-time,” said Mattapoisett resident and state representative, Bill Straus.  “You would be giving up authority locally if you pass this amendment.”

The motion was defeated by an overwhelming majority vote.

Following another defeated motion that would require the Harbormaster be a Mattapoisett resident, Article 3 was carried by a vote of 159-18.

“I just want to say that it’s been a real honor to be your Harbormaster,” said Field while at the podium.  “I’ve gotten a little long in the tooth but I will help find a suitable replacement.”

While the nature of Article 5 was not in question, the fact that the Finance Committee’s recommendations were not part of it, was brought up.

“In the old days, the Town Warrant always had, following the article, the recommendations of the Finance Committee.  We have no had that in recent years.  I don’t know why. Tonight, we’re talking about an article where we don’t even know what the Finance Committee’s recommendation is.  And we’re spending almost half a million from Free Cash,” said resident Brad Hathaway.

Some residents took issue with the fact that the road would be paved without extending water and sewer service, but Highway Surveyor Barry Denham admitted a disconnect in communication between the highway and water departments when the contracts were being drawn up.  Others raised concern that the wording of the article itself was confusing, as it specifically listed “Mattapoisett Neck Roads” with no other public ways mentioned.

“Whatever we can get paved beyond the main portion of Neck Road, we intend to pave,” Denham said.  He added that he has about $70,000 leftover from current projects that he would like to use to the benefit of the Mattapoisett Neck Road project.

Not everyone was convinced that road paving would be the best use of such a large amount of money.

“Why do we spend more than a third of Free Cash rather than transfer money from retained earnings?” asked resident Michael King, who felt that the Free Cash could be better spent elsewhere.

Chairman Collyer cited issues with the repaving of Route 6 as inspiration for making sure Matttapoisett Neck Road is paved correctly.

“We don’t want a repeat of Route 6, where we had to redo a lot of the work because the state wasn’t happy.  This article is a necessary evil.  This road is going to be paved.  It’s going to happen before the Annual Town Meeting,” said Collyer.  “[In a few years] We’re up against $500-$700,000 to rebuild a road we’d have to fix no matter what.  We have the financial ability right now to make this a reality.  I struggled with this even before it went on the Warrant.  It’s just the right thing to do.”

Pat Donahue of the Finance Committee said the extra money comes from higher-than-expected state aid, as well as revenue collected from permits associated to local construction.

“The consequences of not doing it will end up eating up our budgets and Free Cash later,” said Donahue.

There was more contention than expected during the discussion of Article 8, regarding access to walking paths at Tinkham Forest.  The article would allow the town to give up its rights to public land used as access to the forest in exchange for the use of private land access, owned by the Bay Club and Village 6 County Road.

Many residents were concerned that there wouldn’t be adequate parking at the opening of the new walking paths, while others felt that part of the article violated the original contract between the Town and businesses.  When no legal conflict was found between the suggested wording and the Warrant text, the article was carried by a vote of 100-3.

During the discussion on Article 10, dealing with the purchase of land on Chapel Road, Brad Hathaway spoke on behalf of the Community Preservation Program.  He emphasized the need for more open space in Mattapoisett, adding that it has not been a high priority in the past.

“I think it of more as open space for the rural character of Mattapoisett,” said Brad Hathaway during his statement on the article.  He cited previous preservation projects that included affordable housing development and historical preservation, but none for open space.

“It’s time the town said to the Land Trust: thank you.  And one way they can do that is by voting to accept the payment of the west parcel of these woods which have been up for sale now since the spring.”

He added that he would like to see a time limit imposed on the negotiations in an effort to ensure the acquisition of the property by the town for fear that it could be purchased by an outside party.

“Then the open space would be lost forever,” said Hathaway.  He then made a motion to attach a 30-day limit to negotiations, which he later retracted before a vote was held.  Instead, he made a motion to reduce the estimated purchase limit of $125,000 to $110,000.  That motion was passed.

Finance Committee Chairman Gary Johnson said that the town has not made an offer to buy the property, but didn’t view the acquisition favorably because it did not meet the criteria for being a high-priority project.

“We thought it’d be fair to have this article be considered along with other community preservation needs and that it was a bit unfair to be taken ahead of the others,” Johnson said.  “The Board has never voted on this article, we have no position on this article.”

Finance Committee member Pat Donahue later said that their committee only had about $45,000 in reserve for open space purposes.

Donahue said that replacing the float at Barstow Wharf and repairing the Hammondtown tennis courts were both pricey and higher priority projects than purchasing open land.

“There are a lot of priorities and not a whole lot of money so we need people to think carefully if this land purchase outweighs the benefits to the public at large compared to these other projects,” Donahue said.

The acquisition of open land did not take with some residents who thought the money should be used elsewhere, like for recreation purposes or repairing the wharfs on the waterfront.

“What we have is the use of public funds for private benefit,” said Connie Coleman.  “This piece of land on Chapel Road doesn’t come anywhere near what I would consider to be open space.  This is a house lot.  The reason this piece of land is on the market is because of the sewer construction.  Even the realtor has said in her advertising that this is a piece of land that would support one house.  What we have this evening in my view is a neighborhood that doesn’t want a new house in the neighborhood.  This is 3.1 acres.  It will still largely be a tree lot with one house on it.  I do not believe we should be spending very scare taxpayer dollars to protect a neighborhood that doesn’t want a new home in it.”

One resident who did not identify herself by name, but claimed to be an abutter to the open lot in question, wanted to keep the land open for the sake of the passage of wildlife through the wooded areas nearby.

“When I started getting signatures from my neighbors in the area, they all wanted to save this piece of land, but they didn’t think anybody else in town would care,” she said.  “What I found, with the people that live in other neighborhoods, a lot of people thought this land was already protected and they couldn’t believe it was for sale.”

But there was little hope for any progress to be made on Article 10 during this Town Meeting.  A motion to indefinitely postpone the article was carried by a vote of 59-41.  The issue could be brought before Town Meeting again in the spring.

• Article 1: Amendment to Water and Sewer Budgets: To allow the Town to amend the vote taken under Article 2 of the May 14 Annual Town Meeting.  Carried 191-2.

• Article 6:  Storm water drainage easement:  To allow the Town the acquire property at Marston Court in connection with a Town drainage pipe placed previously on a privately-owned parcel.  Carried 140-0.

• Article 9: To allow the town to renovate restrooms at the Town Beach, Shipyard Park, and Ned’s Point in order to make them handicap accessible.  Carried 90-0.

• Article 11: To allow the Board of Selectmen to acquire land on Acushnet Road for water protection purposes.  Carried 60-0. 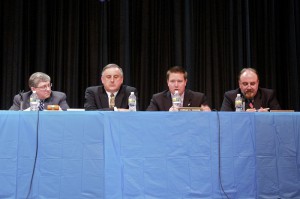