Applicant to establish an aquaculture farm off Ram Island Shea Doonan will have to wait further for the Marion Conservation Commission to grant, or not to grant, his Request for Determination of Applicability for the project.

Continued from October 14, the public hearing was again continued until November 18 until Doonan, annoyed abutter Michael Moore of Ram Island, the harbormaster, and the Marion Board of Selectmen can further come to an agreement on placement of markers of Doonan’s proposed shellfish farm.

On October 28, the commission again expressed its discomfort voting on a determination for Doonan’s application until further talks can resolve Moore’s issues, the selectmen’s concerns, and now neighboring aquaculture farmer Catherine Brodeur’s concerns.

After hearing from Doonan and Moore, Brodeur approached the podium to say that Doonan’s project would be close to her site, thus inviting the possibility of cross-contamination should a disease outbreak occur. She also commented that the eastern markers encroach an area utilized by boat traffic.

“I would’ve thought it would be nice if you had come and introduced yourself,” said Brodeur to Doonan. “We could’ve spoken a little bit.”

Moore continued with his enduring concerns over how Doonan pursued the project without consulting him, leaving him still unable to condone the project out of spite for Doonan’s lack of communication.

“He has addressed my comments,” stated Moore, “But we haven’t agreed that the addressing thereof is satisfactory in my point of view.”

Moore apologized to the commission for behaving “forcefully” during the last meeting, saying it was because he had only known about the project for 24 hours. He said he was reacting then, but now, calmly addressing the commission, he has had some time to think about the matter.

Moore handed out an aerial image of the site, maintaining that the aquaculture farm would encumber boat traffic, even with the subsequent changes made with the assistance of the harbormaster.

Although Doonan wanted the commission to vote to determine the RDA, Chairman Normal Hills preferred to continue it, should further changes be made to the plan in the meantime. Hills told Doonan the selectmen have the final say on the future of the aquaculture farm whether the commission acts that night or not.

Commission member Cynthia Trinidad candidly told Doonan that she plans to vote ‘nay’ on the project just because of Doonan’s attitude.

“These gentlemen are a lot nicer than me,” said Trinidad, gesturing to the other commissioners. “I would vote ‘no’ already. I will probably continue to vote ‘no’ for this project.”

Trinidad said she did not reject the idea of an aquaculture farm; rather, she resented Doonan’s attitude towards the project, calling him “lackadaisical.”

“There were emails [between Doonan and the commission] … that had Mr. Moore’s email on it, so you knew that we wanted you to make some kind of approach to him.”

The commission members, at the end of the meeting, agreed that Doonan should have “handled the situation” differently.

Also during the meeting, the Conservation Commission granted both a positive and negative determination (no Notice of Intent required) for different aspects of a plan to repair a residential septic system for Robert Nau at 53 Piney Point Road.

John Almy received a negative determination for the demolition of two decks to be replaced by two new larger decks at 93C Piney Point Road.

The Sippican Lands trust received a negative determination for an Eagle Scout to install a wooden boardwalk through some wetlands at the White Eagle property off Parlowtown Road.

The commission issued a three-year extension to Shay and Christine Assad at 31 Cove Street to remove invasive species from the property.

The next meeting of the Marion Conservation Commission is scheduled for November 18 at 7:00 pm at the Marion Town House. 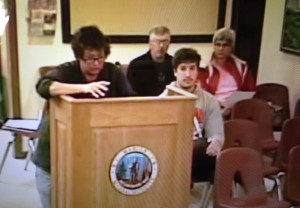