You are here: Home » Features » The Legend of Witch Rock

You’re driving along New Bedford Road in Rochester when all of a sudden you see a rock that seems larger than life, nearly as tall as the trees in the area, with a witch and the words “Witch Rock” painted in black on the side. The rock, which is located on the property of the house at the intersection of New Bedford Road and Vaughn Hill Road, has been attracting local residents for decades, but very few people actually know the story behind it.

One of those very few people is New Bedford resident Joyce Magan.

“People used to come from all over and take pictures,” said Magan. “It was a place for people to go out in the country.”

Magan grew up in the house where Witch Rock is located and lived there for 18 years prior to moving to New Bedford. For years, Magan’s mother, Shirley E. Vaughn Thompson Norton told the legend behind rock.

Magan’s family descends from both the Pequawket and Abenaki Indian tribes. The Pequawket Indians were originally from Maine, but relocated to Massachusetts after the tribe sided with the British during the Civil War and the tribes ordered them out of town. The Boston courts moved the tribe to Mattapoisett, Magan said, before they ended up in Rochester.

The rock had always been a part of the property, and according to Indian legend, a witch was hung on the property during the witch trials. The Indians believe the spirit of the witch lives inside the rock, and during a full moon, one could hear the cackling and screaming of the witch emanating from the rock.

“During a full moon, I would think ‘oh man, is this witch going to come or what’?” Magan said. “But I wasn’t really aware.  It was just something I grew up with and it was just where we lived.  It was my mother’s idea to make it known.”

Norton started painting commemorative plates in the 1960’s in honor of the rock’s 300th year.  She began selling the plates in order to raise money for one of her daughter’s weddings, but the project grew into something much larger, and Norton ended up painting 300 plates to give to the Rochester Chamber of Commerce to sell. Norton began painting the rock in 1990.

On Halloween, Norton went out of her way to get both her family and trick-or-treaters in the spirit.  From bobbing for apples to homemade games, Norton made the most out of Halloween and used Witch Rock as the centerpiece for the celebration.

“Halloween was huge,” said Magan. “She made everything fun. Even though we didn’t have a lot, she always made it feel like we did.”

Twenty-seven years after living on the property, Norton decided to move in 1972. At 86 years old, she now lives in Arizona with one of her daughters. None of Magan’s family lives in the area, and while times have changed since she grew up, one things remain constant: the legend of Witch Rock will continue to be a rich part of Rochester’s history for years to come. 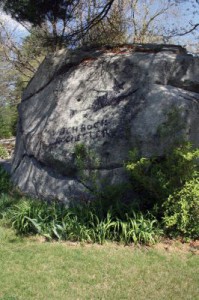 6 Responses to “The Legend of Witch Rock”