When you lose your grandmother to Alzheimer’s disease, your mother to it, and now your aunt is stricken with the devastating illness as well, you get to thinking, is Alzheimer’s destined to be my inevitable demise, too?

This is the reality facing 53-year-old Marion resident Terrance Lee who, at the time of turning 50, took a good look at himself and the risk factors he was harboring and decided he had to do something about it.

So he did some reading on the topic, looking for a ray of hope, a way to lower his chances of developing the debilitating disease that appears to run in families.

“I learned that’s not necessarily the case,” he said. He found through research that he could live a happy, healthy lifestyle, exercise more, and improve his eating habits, all ways found to help stave off Alzheimer’s, he said.

It wasn’t long before Lee’s motivation brought him to his feet, running marathons and road races along with his brother, Cliff Lee, who lives in Salt Lake City, Utah. Yet, with so many others out there who face the risk of developing Alzheimer’s disease, Lee felt compelled to share the hope of outrunning the disease by reaching out to others in his age bracket, the Baby Boomer generation, to get more people involved in taking control of their health and their future.

“The idea was, how can I motivate myself as well as other people who have the same concerns?” said Lee. “I started this thing called ‘BoomerangFit.’ We’re ‘boomers’ but we want to ‘boomerang’ back to where we were twenty, thirty…when you felt like you were okay from a health standpoint.”

Two years ago, Lee and his brother ran the Boston Fenway Park Spartan Race Sprint and recruited a group of boomers to join in. It was fun, Lee said, figuring perhaps he could do more healthy events like that more often – “crazy” events, Lee said, crazy enough to raise awareness of the disease and so people might be inclined to sponsor Lee to raise funds for the Alzheimer’s care, treatment, and research for a cure.

Lee figured, “Let’s do that by setting goals to do crazy stuff and let’s use the crazy stuff to raise money.”

This year, after a number of Spartan obstacle races, Lee wanted to step things up for 2016 with something that would make people say, “Holy crap! I would never do that!”

Lee factored in his fear of heights and thought, hmm … let’s climb a mountain.

So this year’s crazy challenge is to climb Mount Baker in Seattle, said Lee.

Mount Baker is an ‘active glaciated andesitic stratovolcano,’ part of the Cascade Volcanic Arc, and the third highest peak in the state of Washington at 10,781 feet.

In preparation, Lee trained on “how not to die,” as he put it, and he will be joined by two other mates when they begin the climb on Thursday, July 16.

“Like everyone, I need a goal of something to motivate me,” said Lee. He still gets up at 5:00 am to train and workout every morning. “When you’re getting up at 5:00 am, it’s good to have that goal of, holy crap, I have to climb a mountain in two weeks!”

BoomerangFit is now ten boomers strong. If you’re interested in learning more about the group that does “survivable, crazy, but not stupid” challenges all to keep themselves strong against the threat of Alzheimer’s while raising money for a cure, visit www.boomerangfit.com. To support Lee’s Mount Baker challenge, you can donate online at www.curealz.org/heroes/team-boomerangfit.

“I got two kids in college, so I need to stay alive for a few years,” said Lee. 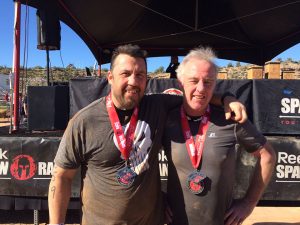