The All-State track meet is one of the biggest of the season; the state’s top 24 athletes in each event race against each other to decide the state champion for the indoor season. Old Rochester had several outstanding performances in the meet, including senior Ally Saccone, who once again proved her capability to compete on a state level.

Saccone placed third in the girls’ 55 meter hurdles and seventh in the long jump in a great day for the senior. In the preliminaries for the girls’ hurdles, Saccone placed seventh, running an 8.70. Although not her best time, it served its purpose as she was able to advance to the finals. In the finals, she cut off .2 seconds, a considerable amount of time for such a short distance, to place third overall with an 8.50. She was only edged out by Emily Dawidcyzk of Oxford and Melissa Isidor of New Bedford.

Saccone did not stop there. Right after her hurdle finals, she ran in the 55 meter dash, where she placed 13th with a time of 7.56 seconds. She then proceeded to jump 16 feet, 6 inches to take seventh in a talented long-jump field.

Although Saccone had a phenomenal day, she was not the only one from the Bulldogs track team to impress. Junior Mike Wyman, who was seeded 20th in the 1,000 meter run, was forced to run in the unseeded section of the event, where the slower times were. Despite this major setback, Wyman was still able to come in 5th place with a stellar time of 2:33.

Senior Dan Donohue also ran well, placing 11th in the 300 meter dash, running the quick race in 36.45 seconds. Donohue then joined up with senior Kevin Noone, junior Colin Knapton, and sophomore Kevin Saccone to run the 4×200 meter relay, where they placed 14th with a 1:34.47, once again breaking the school record for the event. Senior Aaron Holick, who just sneaked into the All-State meet as the final qualifier in the shot-put, also competed, placing 24th with a throw of 43 feet, 10.25 inches.

This essentially concludes the indoor track and field season for Old Rochester. Because of her third place finish, Saccone will be advancing to the New England meet, and Wyman could also have a chance of advancing due to this excellent time. Saccone, Wyman and the boys’ 4×200 meter relay will also be competing at the New Balance Indoor National meet in early March. 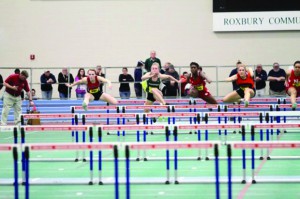