You are here: Home » Sports » Football Stays Undefeated With Homecoming

It was a sparsely scheduled but exciting week of sports at Old Rochester Regional High School. Cross country did not participate in any meets this week, and almost every other team had only one game as the regular seasons came to a close. The most exciting game of the week was the homecoming football game on Friday, which received a large crowd of students, alumni, and community members who watched as the Bulldogs remained unbeaten in their final regular season game. Here is a look at the eighth week of results for ORR Athletics.

Volleyball: The girls came into their final game of the season against Pope John Paul II with a winless 0-17 record, but were able to end their season on a good note, notching their first win with a 3-2 victory. Led by senior Juliana Nicolosi, who had 10 digs and 7 kills during the game, the girls rallied together to win their final game. The girls, who had almost won a few games this season, notably against Wareham, were able to pull through in the end and secure their first victory of the 2013 season.

Golf: The golf team, coming off of a second-place finish at the South Coast Conference Championships, participated in the Division 3 South Sectionals this week. The boys unfortunately were not able to qualify as a team to advance to the next round, but junior Jackson Mitchell, who shot a 5-over-par 76, was able to qualify for the state individual tournament. Mitchell tied for second with Fairhaven’s Tyler Hemingway in the match.

Field Hockey: The girls finished their regular season off with an impressive 5-0 victory over Wareham High School this past week. The girls, who placed second in the SCC behind Apponequet, were led by junior Devyn O’Connor, who recorded a hat trick. Junior Margaret O’Day and senior Jess Kocur also pitched in with a goal apiece, while Darby Nolet and Carly Pelissier each notched an assist for the Lady Bulldogs. The girls are now awaiting their postseason seeding, as they qualified for the tournament earlier this year.

Boys’ Soccer: In their final game of the regular season, the boys defeated Bourne High School by a score of 2-0. Seniors Jack Smith and Robby Magee netted the two goals for the Bulldogs, which was appropriate as it was senior night for the Bulldogs. Freshman Luke Muther recorded an assist for the Bulldogs, and sophomore Goalie Melvin Vincent continued his excellent season, making eight saves in his sixth shutout of the season. Besides Smith and Magee, the other honored seniors were Chris Carando, Mikey Pruchnik, Mitch Geldmacher, Alden Truesdale, Paul Graves, and Connor Blagden. The boys, like the field hockey team, are now awaiting their seeding for the MIAA state tournament.

Girls’ Soccer: The girls capped off their regular season with a 1-1 tie against Bourne and a 2-1 loss to out-of-conference Hanover High School. Though the girls did not end their regular season on the best note, they easily qualified for the state tournament and will await their seeding over the next week.

Football: The biggest game of the football season is generally the homecoming game, and the Bulldogs did not disappoint this year, as they defeated the Seekonk Warriors 31-14 to cap off their undefeated season at a perfect 7-0 record. Senior Quarterback Nolan Bergeron went 5 for 8 for 108 yards and three touchdowns, with junior Alex Aruri, sophomore Darien Dumond, and Haydon Bergeron on the receiving end for one touchdown each. Dumond would later rush for a 19-yard touchdown, and would finish off the game with 85 total rushing yards on 12 carries. Haydon Bergeron also scored a field goal late in the second half to give the Bulldogs a 3-point lead over the Warriors going into halftime. Aruri and Dumond each scored an additional touchdown, but were called back due to penalties. The win is significant for the Bulldogs, as it qualified the boys for a playoff berth and set up the SCC Championship game, which will be decided against Apponequet on Thanksgiving Day.

Below are the overall team records, followed by the conference records in wins, losses, and ties as of October 27. 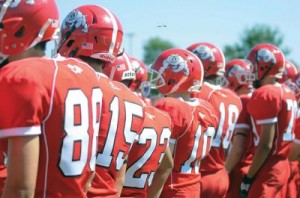