In a very exciting week for Old Rochester Regional High School sports, the Bulldogs routed the Wareham Vikings in the Cranberry Bowl, Golf capped off an undefeated season in the SCC, and Girls’ and Boys’ Cross Country finished up excellent campaigns, with the girls winding up undefeated.

Football: The hunt for Justin Kogler’s first win as head coach continued as the Bulldogs headed down Route 6 on Friday night to face the Wareham Vikings in the much-anticipated ‘Cranberry Bowl.’ Several star players were still injured, so there was pressure on some of the team’s younger players to deliver, as has been the case far too often this season. However, on Friday night, these players were up to task, as the Bulldogs cruised to a 41-13 victory to get in the win column for the first time this year. Junior quarterback Cam Hamilton was 3-5 for two touchdowns, and he added another via rush. Sophomore running back Harry Smith has been one of the team’s most productive players, and he rushed nine times for 82 yards and two scores, including one off a 44-yard run. The receivers on Hamilton’s touchdowns were a pair of juniors: tight end Grant Reuter and wide receiver Isaiah Gomes. The game’s most exciting plays belonged to junior and former Wareham Viking Michael Mcallister – a 73-yard kickoff return touchdown – and junior Andrew Riggi –two interceptions and a third that was overturned. With momentum building, the Homecoming game will be played on Friday at 7:00 pm against Seekonk.

Boys’ Soccer: The boys were able to get some good practices in before returning to action on Friday to face Dighton-Rehoboth at home. Trailing 1-0 with 15 minutes left to play, junior Alex Sosua assisted a goal to senior Hunter Parker. Five minutes later, sophomore Ben LaFrance sent a pass to Sousa that resulted in the game-winning goal in the 2-1 match. At Dartmouth High on Saturday morning, the boys held the powerful Indians to two goals but were unable to score one of their own. Next up is Wareham on Monday and GNB Voc-Tech on Wednesday.

Girls’ Soccer: Away against non-conference New Bedford High on Columbus Day, the girls were handed a 1-0 loss. On Saturday morning at home against Dartmouth High, they suffered a 2-1 defeat, despite an attempt at a late comeback. The girls face Wareham, GNB Voc-Tech and Apponequet this week.

Boys’ Cross Country: Boys’ Cross Country finished their regular season 6-1 after an 18-39 defeat of Apponequet on Tuesday at Washburn Park in Marion. Freshman Adam Sylvia led the way with a 17:49 race, followed by junior James Goulart (18:14), junior Will Hopkins, and senior Jared Wheeler. At Saturday’s Bay State Invitational in Westfield, Sylvia led the way with a 17:33 time while freshman Geoffrey Noonan had a breakout race, coming in second for the Bulldogs. They have a bye week next week as they gear up for the SCC Championship.

Girls’ Cross Country: On Tuesday at Washburn Park in Marion, the girls’ cross country team had another day to remember. They placed the first nine runners against a rival Apponequet squad, completing yet another 15-50 clean sweep victory to earn an undefeated season. Senior Maddie Meyer (19:47), senior Nina Bourgeois (20:15), and junior Avery Nugent (20:17) were the top three runners for the dominant team. On Saturday at Stanley Park in Westfield, the girls competed in the Bay State Invitational. Meyer ran a 19:36, and sophomore Madisen Martin ran a season-best 20:16. They were followed by a pack of Nugent, Bourgeois, sophomore Madeline Scheub, and senior Emily Josephson. They get a break next week before the SCC Championship on October 31.

Volleyball: Wednesday at home against non-conference New Bedford High, the girls lost three sets to two. The scores of the sets for the Lady bulldogs were 25-21, 17-25, 13-25, 26-24, and 11-15. It was tough loss, but at the very least, it had no impact on the girls’ conference record. Friday night at Dighton-Rehoboth, the girls lost another 3-2 battle, which stung a little more. Still, the Lady Bulldogs have a strong group of seniors ready to tackle their upcoming slate of games, which includes Wareham, GNB Voc-Tech, and Apponequet.

Golf: ORR Golf continued to roll with a 167-100 victory over Case at Touisset Country club in Swansea on Wednesday. Sophomore stars Collin Fitzpatrick and Jason Gamache each shot a 36 to maintain their excellent seasons, while veteran Jared Nye – the team’s only senior – was third for the Bulldogs, shooting a 40. The boys met up with the Apponequet Lakers at the Bay Club on Thursday in a match to decide the SCC’s best record. They nearly duplicated the result from their recent meeting as they won by a score of 178-145 under the Modified Stableford scoring system. Junior Tyler Mourao shot a 37 to lead the team while freshman Alex Henrie had a breakout performance, shooting a 39. Gamache (38) and Nye (39) also played well. Friday marked the all-important SCC championship, hosted at the Bay Pointe Country Club in Onset. It wound up being a somewhat odd ending to the regular season. ORR finished second at the match; but not to a well-regarded Apponequet club, who finished fourth. It was the Fairhaven Blue Devils who came away with the one-stroke win, but ORR still managed several strong performances. Fitzpatrick shot a 72 on the 18-hole course and was named conference MVP. Gamache (78), Nye (82), Mourao (85), and junior Russell Noonan (85) followed with good rounds. Nye earned the league Sportsmanship Award, and Gamache, Fitzpatrick, and sophomore Jacob Yeomans were named SCC All-Stars. The State Sectional Tournaments will take place in Dennis this Monday.

Field Hockey: Starting off the week at home against Wareham on Wednesday, the girls notched a 6-0 shutout victory. Senior Maggie Wiggin led the way with two goals, while Sarah Ryan (Sr.), Ali Hulsebosch (So.), Sophie Church (Jr.), and Hannah Guard (Jr.) each recorded one. The girls traveled to face D-R on Friday, where they locked in a defensive struggle that wound up as a scoreless tie. Sophomore goalie Riley Goulet played very well, preventing another loss to the Lady Bulldogs’ rivals. This week is quite busy for the girls, as they are pitted against Bourne, Apponequet, Case, and non-conference Somerset-Berkeley.

Below are the overall fall team records, followed by the conference records in wins, losses, and ties as of October 18. 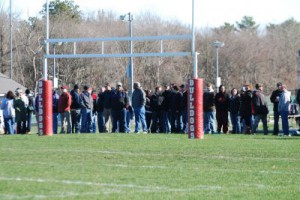