Boys’ Basketball: The Old Rochester Regional boys’ basketball team had three games this week and finished two of them with wins. The Bulldogs started the week off with a matchup against Dighton-Rehoboth and won 73-46. Senior Jacob Caffarella led the team with 15 points. Caffarella was followed by Jason Gamache with 13 points and Matt Valles with 11 points. However, numerous other varsity members helped the score: Bennett Fox (9), Tyler Mourao (7), Russell Noonan (6), Cole McIntyre (6), Jacob Yeomans (3), and Pat Cummings (3). Later in the week, ORR played Dartmouth in their Senior Recognition Game and won 70-49. Noonan was the leading scorer of the night with 18 points. Gamache followed with 13, Valles with 11 points and 16 rebounds, and Fox with 11 points. All of the seniors managed to get some points on the board, and it was a great win for their last regular season home game. The Bulldogs finished up their week with a 77-58 loss to the Wareham Vikings. The teams were evenly matched through the first three quarters, but Wareham ultimately pulled ahead in the last to win the game. Gamache led the team with 13 points and four steals, Noonan had 11 points and 10 rebounds, Valles had eight points and 11 rebounds, and Cummings and Mourao each had six points. The ORR Bulldogs now share the SCC championship title with three other teams. Their final season record is 14-5/12-4.

Boys’ Hockey: The Old Rochester-Fairhaven boys’ hockey team started off strong last week with their 16-1 win over Apponequet. In the first period, Sam Henrie had a hat trick, and Noah Strawn, Ryan Labonte and Tayber Labonte each added to the score. By the end of the first, the score was 9-0. The second ended with a 13-0 lead over the Lakers with Chris Gauvin, Ben Austin, Landon Goguen and Strawn each contributing a goal. In the final period, Sam Parks scored a goal, along with two from Evan Stanley. This is the Bulldogs 16th straight win to advance their record to 18-1. Later in the week, ORR-FHS traveled to Pembroke to play Hanover, the reigning Div. 3 State Champions. After the first period, there was no score. Hanover took the lead in the second, scoring two goals. At the end of the second, the Bulldogs had yet to put any points on the board. In the third, Hanover scored two additional points. Tayber Labonte scored the lone goal for the Bulldogs’ with the game ending in a 4-1 loss. In their last game this week, Old Rochester-Fairhaven faced Bishop Feehan. After the first, Feehan led 2-0. During the second, Feehan scored two more goals, and it wasn’t looking good for the Bulldogs. Things started to turn around in the third period. Goguen added two goals, while Strawn and Stanley each contributed an additional goal. However, Feehan scored one more time to result in the 4-5 Bulldog loss.

Girls’ Hockey: The BMW-ORR girls’ ice hockey team played very well last Tuesday to win their matchup with Bishop Stang 3-1. Carly LaCasse scored two goals in the first, while Stang only put up one point. Neither of the teams scored in the second. However, in the third, Leah Hidenfelter sealed the win with an additional goal. Chelsea Peterson and Julia Elicier both recorded assists. Sophia Schiappa had an incredible 20 saves. This 3-1 win advances the BMW-ORR to 7-8-1.

Girls’ and Boys’ Track: Both track teams had their state championships last weekend at the Reggie Lewis Center in Boston. Little did anyone know, the boys’ track team was going to make history by becoming the Division 5 State Champions. Danny Renwick led the team with three first places finishes in high jump, hurdles, and 4×400 relay. Renwick managed a meet record of 6 feet and 8.25 inches for the high jump. He also ran the 55-meter hurdles in 7.71 seconds. Not far behind were teammates Will Hopkins, who placed third, and Eli Spevak, who ended in fourth. Renwick, along with Spevack, Anthony Childs and Adam Sylvia, won first place in the 4×400 relay (3:34.18). The girls track team placed seventh overall. Brooke Santos stood out by having two top finishes in high jump (5-0), where she placed second and 55-meter hurdles (8.89), where she placed third. Rachel Demmer placed fourth behind Santos in the 55-meter hurdles. 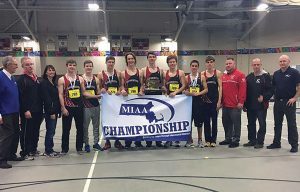