Here is a look at the third week of scheduled games for ORR spring athletics.

Baseball: The Bulldogs had a great week, winning all three of their games against Fairhaven, Dighton-Rehoboth, and GNB Voc-Tech. Against Fairhaven, the boys won 11-8 thanks to a strong offensive performance by designated hitter Austin Salkind, who hit three doubles, a home run, and scored three runs on the day. Tyler Zell earned his first victory of the season after pitching five-plus innings, with Ryan Plunkett earning a save after taking over the mound in the sixth inning. The boys went on defeat Dighton-Rehoboth 3-1 later in the week, with ace pitcher Andrew Ryan recording 12 strikeouts and only allowing two hits. The boys finished out their winning week with a 9-6 victory over GNB Voc-Tech.

Softball: The Lady Bulldogs were not as fortunate as the boys’ baseball team, as the girls lost both of their games this week. The girls suffered a tough 24-0 loss to Fairhaven early in the week, as Fairhaven’s pitcher Courtney Girouard pitched a perfect game against ORR. Later in the week, the girls lost to Dighton-Rehoboth 6-3.  Despite the loss, however, Kaleigh Goulart played well, striking out five on the pitcher’s mound and recording a hit. Courtney Dextradeur, Sam Allaire, and Maddie Lee also added hits for the Lady Bulldogs, whose record drops to 1-6.

Boys’ Track: The boys’ track team remained perfect this week, winning their third meet of the season against Bourne, 89-46. The highlight of the meet was senior Mike Wyman, who broke Mike Tiger’s three-year-old school record in the 800-meter with a 1:54. Also shining for the Bulldogs was junior Kevin Saccone, who won the long jump, triple jump, 400 hurdles, and 110 hurdles to contribute 20 points to the team victory. Other winning performances came from Colin Knapton (high jump, javelin), Jack Smith (100 meter, 200 meter), Ben Dion (400 meter), and Jesse Noonan (shot-put).

Girls’ Track: The Lady Bulldogs also remained undefeated this week, continuing their dominance in the SCC with a 122-13 win over Bourne. The girls placed first in every single event on the day, while also claiming several seconds and thirds. Both Abby Adams and Paige Santos were double winners for the girls, with Adams claiming the long jump and 100 hurdles and Santos claiming the 200 meter dash and the high jump. Another highlight was that the girls swept the throwing events with Jill Sethares winning shot-put, Nicole Gifford winning javelin, and Morgan Browning winning discus.

Boys’ Tennis: The boys started their week off strong with two wins over Dighton-Rehoboth, 4-1, and Apponequet, 4-1. In both matches, Alex Bilodeau won at first singles, as did the third singles, with Doug Blaise claiming the win over DR and Josh Lerman against Apponequet. However, the boys’ winning streak was cut short later in the week with a tough 4-1 loss against Dartmouth. Bilodeau provided the lone victory for the Bulldogs in the loss.

Girls’ Tennis: The Lady Bulldogs had a so-so week, as their undefeated SCC season came to an abrupt close. The girls started the week off strong, claiming a close 3-2 victory over Dighton-Rehoboth thanks to a pivotal win by senior Haley Dickerson at second singles. In a tense third set, Dickerson came through to win 6-2 and give the Lady Bulldogs the needed third point for the win. Unfortunately, later in the week the girls suffered their first conference loss and second overall loss to SCC rival Apponequet, 4-1. Julia Nojeim provided the lone win for ORR at first singles. The loss marked Apponequet’s first ever win on ORR’s home courts, and gives them the upper hand in what will likely be a close SCC title race.

Boys’ Lacrosse: After a tough 14-5 loss early in the week to Dartmouth, the boys looked to turn their luck around against out of conference Pope John Paul II. Thanks to Ethan Lizotte and Mikey Pruchnik, who both scored two goals apiece, the boys defeated Pope John Paul II 9-4. Connor Severino was dominant on face-offs, where he won 16 of 17. Severino also added a goal as did Nic Suprenant, Chris Nadeau, Ryan Manning, and Landon Goguen.

Girls’ Lacrosse: The girls suffered their second conference loss this week against Apponequet, 16-8. Bailey Truesdale scored four goals on the loss, with junior Chloe Riley adding a hat trick and Mikayla Demanche contributing with one goal. The loss put the girls further back in the SCC rankings, which is also shaping up to be a tight race. Later in the week, however, the girls defeated Sturgis West by a huge 17-2 margin. Three Lady Bulldogs scored hat tricks: Truesdale, Julia Barrett, and Sarah Ryan. Freshman Emily Hiller added two goals in the big win.

Below are the overall spring team records, followed by the conference records in wins, losses, and ties as of April 13. 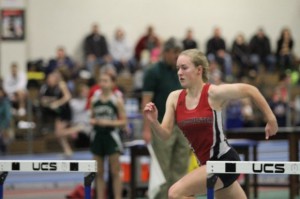