You are here: Home » Schools » The New Titans of Business

Last Thursday, one of Old Rochester Regional High School’s five teams won first place at UMass Dartmouth’s 1st annual Junior Achievement Titan Challenge. The winning team – seniors Zach Bowen, Kiernan Besse, and Jeremy Bare – were victorious against roughly fifty other teams from schools across southern Massachusetts. Each student on the winning team was awarded a $1,500 scholarship to the college of their choice.

The Junior Achievement Titan Challenge is an economics-based game in the form of a computer simulation. Teams are given a fake product to sell, and using their knowledge of the business world, they must make decisions in six main categories: cost, production, marketing, research and development, capital investment, and charitable donations.

“You had to find the right balance,” said Emily Hyde, a senior at ORR and a participant in the Junior Achievement Titan Challenge. The team who found this balance was named the next titan of business.

Although Hyde and her partner, Curran Desjardens, didn’t win first place, they were fairly successful throughout the challenge. The challenge was broken up into different rounds, with eight or nine teams playing against each other in each round, and Hyde and Desjardins were often in first place at the end of a round.

“At the end we would slip off a little bit because they would throw us a curveball,” Hyde recalled, “but we never came in last, so it was really fun.”

Before the day of the challenge, the students from ORR weren’t entirely sure what to expect. The Junior Achievement organization had provided a study guide, but other than this slight aid, few of the ORR students did much preparation.

“Other schools had done a lot of prep work, and all we’ve done is this class,” said Hyde, referring to her Honors Economics course with Erich Carroll, a social studies teacher at ORRHS.

Clearly, this course has been very influential. Zach Bowen, a member of the winning team, said he and his peers didn’t prepare before the challenge. They figured out a strategy as they went along, recalling prior knowledge from economics class.

“I didn’t really have any expectations going into it,” Bowen admitted. He felt the odds were against them as they entered a room with fifty other teams. Still, Bowen’s team was more prepared than he thought. When asked about what strategies they used, Bowen responded, “Well, we had Jeremy Bare; he’s really good with stuff like that.”

Each team at the Junior Achievement Titan Challenge was also given an adult mentor, someone with experience as a banker or economist. “Our mentor was a big help,” said Bowen, “He gave us good ideas and good tips on what we should do and what we shouldn’t do.”

In the end, Bowen said “it was a good feeling” taking home a $1,500 scholarship victoriously.

Although she didn’t win first place, Hyde said the Junior Achievement Titan Challenge was a great experience. She recalled the intensity of each round, as every student perched on the edge of their seat, then the cheers at the round’s completion, when the winners of each round congratulated their teammates. Hyde said she would absolutely recommend the Junior Achievement Titan Challenge to any underclassman.

“It’s about child labor in the Ivory Coast [in Africa] which produces at least a third of the world’s chocolate,” said Lizzie MacLellan, President of SOLE.

While the documentary showing didn’t have a huge turnout, there was a small gathering of potential club members there to watch the film and enjoy a selection of fair trade chocolate provided by SOLE. MacLellan said the film definitely impacted the viewers, and the group stayed a half hour later just discussing the issues brought to light by the documentary.

“We definitely want to do this again, actually advertise, and see what the turnout is then,” said MacLellan.

At ORR, SOLE is mostly known for their presentations and awareness campaigns. The group has also donated shoes to kids in Haiti through the “Soles4Souls” campaign, and they’ve purchased fair trade soccer balls for the ORR boys’ team in recent years.

MacLellan said SOLE’s biggest obstacle has been getting people to listen, “but once they actually hear what’s going on, they get as fired up about it as we are.” 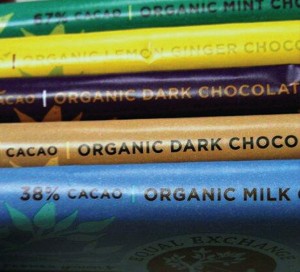