You are here: Home » Schools » Tabor Furthers Women in Leadership

Tabor Academy has undergone a number of changes throughout the school year. Perhaps the most important of these changes is the ongoing transformation to encourage more young women to take part in student leadership.

John Quirk is finishing up his second year as the head of school at Tabor Academy. Although he already finds Tabor to be a great place, one area he sees that warrants change is the area of student leadership.

Quirk has researched a number of leadership styles, diversity within schools, and has also looked into the history of Tabor. While Tabor became a co-ed school 30 years ago, there has only been one female executive officer of the schooner Tabor Boy, and only three female heads of school.

Although there were initially fewer female students than male students, the ratio has balanced out over the past two decades. Therefore, it is startling that young women have not played a more significant role in student leadership at Tabor.

Quirk’s research and concern led him to conclude that a change was necessary.

In an even bigger change, current Student Head of School McKinley Halpern-Reiss recently announced a change in the election process of the student body president.

In the upcoming election, students will vote for both a male and female head of school, and the two winners will become co-heads of school. The elections will begin on April 22, and the final votes will be cast on April 28.

Anne Gardiner and Lauren Millette, both members of the Tabor faculty, have started a Women’s Leadership Program with Pamela McNamara.

McNamara, who has experience in teaching leadership strategies to female business students, is collaborating with Gardiner and Millette to run the sessions. This program aims to teach Tabor girls how to improve their communication and leadership skills. 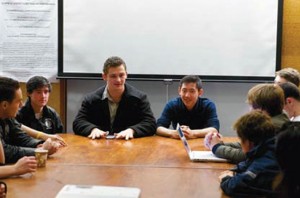