On November 16, 2011, two Tabor girls were seriously injured crossing Spring Street.  Both students were brought immediately to the hospital; the incident terrified the Tabor Academy community as a whole. In light of the event, Tabor administration hopes to make Spring Street and Front Street, both busy main roads in Marion, safer for its students.

The scariest point is that neither the driver nor the girls were at fault; on a rainy night with little-to-no visibility, horrific accidents can occur without warning. Enforcement of the law was not the main problem; the issue is pure coincidence and bad conditions. While Tabor can never eliminate these risks, they can be substantially reduced.

For Tabor students, the most notable change comes in the administration’s reminder that the student needs to ensure their own safety on the crosswalk.              Numerous times, students have been reminded to wait and look down the street as they prepare to cross. Now, the reminder is as visual as it was vocal. The words, “STOP LOOK WAVE” are painted across the front of every crosswalk. Tabor Academy hopes that this measure, while childish, can better guarantee the safety of its students.  Public roads should not be treated lightly. Accidents do happen and even simple actions such as stopping and waving can reduce the risk of injury.

In order to prevent poor visibility, Tabor Academy is also installing other safety measures on Front and Spring Street. Lights on both sides of the roads are being raised in the hopes that the larger lights will enhance visibility at night and in poor conditions. In addition, Tabor Academy will work with NSTAR to increase the wattage, further improving a driver’s ability. Traffic cones also serve to highlight the street and bring attention to the crosswalks. Tabor Academy will also be placing radar speed signs along both roads to remind drivers of the speed limit and reduce speeding.

The Tabor administration took the incident on November 16, 2011 very seriously. Although blame lies with neither party, Tabor hopes that these safety measures will enhance the safety of the Tabor community, and the town of Marion, as a whole. 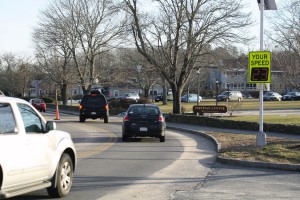 Tabor Academy has implemented many new safety features to safeguard crosswalks on Front and Spring Street. One of the new features is a sign on Front Street that reflects your speed and flashes if you are traveling above the 25mph speed limit. Photo by Paul Lopes