Twice a year, Superintendent of Schools Doug White has to update the Joint School Committee on his goals for the school year; on January 15, White highlighted his six goals and the progress he is making toward meeting them on time.

This year, White ensures the full implementation of the Social Emotional Learning (SEL) curricula and Safe and Secure Practices before the school year closes, as part of the social/emotional goal. White said teachers and students at the junior and senior highs have been exposed to the ongoing training for A.L.I.C.E. (Alert, Lockdown, Inform, Counter, Evacuate), and teachers and staff at all three elementary schools have either received training or soon will.

An advisory program at the high school that began this year with freshmen and will expand each year as it follows the students through each grade, White said, was formed to best address the individual needs of the students. ORR High School Principal Michael Devoll said it is a great program that will follow students from freshman year to when he hands his own designated group their diplomas.

“So you, as a parent,” said White, “you don’t have to say ‘I’ll go to child one today and get to child three next week.’”

“By June 2015, there will be increased awareness, participation, and engagement in school and district activities, using a variety of mediums to eliminate scheduling conflicts,” said White in his presentation.

Goal three, technology, has been the topic of all January School Committee meetings throughout the district, with tech grants and new Chromebooks adding to the achievement of the technology goal.

White promised the establishment of library commons in each of the schools, as well as the upgrading of school technology infrastructure and integration of more one-to-one devices before the end of the school year.

White said goal number five was one of his favorite parts of the job, being inside the classroom. He told the committee he is continuing to establish a presence within the classrooms across the district to observe, and he meets with each school principal bi-weekly to talk about goals and school activities.

“The ability to actually get into the classrooms … is something I really enjoy,” said White. “And I have a soft spot for struggling learners.”

Several members of the Joint School Committee said they are already seeing evidence of reaching goal six, the writing goal, with their own children at home. Junior High School Principal Kevin Brogioli said he hears students saying they are doing too much writing in school.

Marion School Committee member Christine Winters voiced her concerns over how the committee evaluates the superintendent throughout the year.

“I’m not going to wait until the evaluation process (at the end of the year),” said Winters. “It’s not fair to him. He wouldn’t do it to his administration, why would we do it to him?”

“I really appreciate the opportunity to lead this district,” said White. “We’re all in this together.”

The next meeting of the Joint School Committee is scheduled for March 12 at 6:30 pm in the ORRJHS media room. 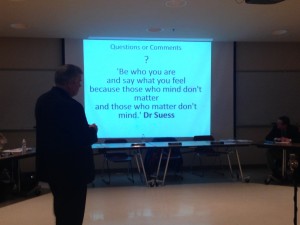