The Old Rochester Regional High School community is welcoming four foreign exchange students into its halls this year. Antione Geller, 18, from Belgium, and Elena Voigt, 17, from Germany, are studying at ORR through the Cultural Homestay International exchange program. Two more students will be joining ORR from the AFS program – Paola Briceno Sanchez, 16, from Mexico, and Marianela Belmonte, 16, from Argentina. The AFS students won’t arrive in America until September 8 due to late house placement, but they will be welcomed into the ORR community soon thereafter. The Cultural Homestay International students, on the other hand, have had some time to settle into their new homes in the Tri-Town. Elena Voigt arrived here from Germany on August 19. Since then, she has been getting to know her host family in Rochester, managing a five-hour jetlag, and taking in her new surroundings. “I haven’t even realized that I’m here yet,” said Voigt after the new student orientation at ORR last Friday. While being immersed in a new country can be overwhelming, Voigt is still looking forward to being a student at ORR, meeting new people, and joining the school’s cross country team. The Clancys, Voigt’s host family, are excited about the year to come. Holly Clancy and her daughter, Alyssa Clancy, a sixth grade student at Rochester Memorial School, attended ORR’s orientation along with Voigt. Holly Clancy said she hopes to “blend” with Voigt, learning about her German culture as Voigt learns about American culture. The family already has some trips planned to allow Voigt to experience as much of America as possible; they’ll be visiting Florida, New York City, Boston, and even Canada over the next year. Clancy first considered hosting a foreign exchange student when she met Louisa Truss, an exchange student from Germany that attended ORR last year. Truss was a student aid in Clancy’s class at the ORR preschool. “I got talking to Louisa and just loved her,” said Clancy, “and I thought it’d be great to have an exchange student live with us.” After filling out a sizable application and passing a home visit and a background check, the Clancy family was approved to host a student. The next step was to choose their new family member from a list of applicants. “We wanted someone that liked to ride horses, because my daughter does, and Elena was the first one [Cultural Homestay International] sent us,” Clancy recalled. “Just reading through everything about her, I felt that she was perfect for our family.” The Clancys are just one of four families in the Tri-Town who have decided to welcome an exchange student into their home. Kim Corazzini, the AFS club advisor at ORR, is pleased to have such a good turnout this year. She noted that finding host families each year can be very difficult. “It’s always a struggle, which is sad, because I think when people do [host], it’s very gratifying,” said Corazzini, adding that she does admit that this gratifying experience is a big commitment. On the national level, the AFS program has also seen struggles. “It’s been a very difficult year for them to place kids,” said Corazzini. Thankful to have four exchange students this year, Corazzini is looking forward to immersing them in the ORR community. She hopes to hold an AFS club welcome social for the exchange students to meet their American peers soon after the school year starts. “The kids become very fascinated with it because they meet friends; they learn about people from different countries,” she said. Corazzini also looks forward to the opportunities the exchange students will have to learn about American culture. She noted that it is not a common practice in other countries for students to have a graduation ceremony or a senior prom. Culturally, these are some of the differences the exchange students can experience at ORR. “What we like to do is to have them have an opportunity to experience the things that are particular to the United States,” she said. As the school year is just beginning, the exchange students have a lot to look forward to. Through joining the ORR community, they’ll share their culture while learning about ours. If your family is interested in hosting an exchange student, either this year or in future years, please visit www.afsusa.org/host-family for more information. By Renae Reints 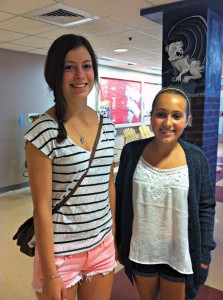