Emily Newell, a junior at Old Rochester Regional High School, has recently graduated from the National Youth Leadership Academy, a high-level leadership course. As a Sea Scout on Ship 40 from Falmouth, Massachusetts, Emily has been training to be a youth leader for quite some time. She had one year to complete five leadership goals in order to officially graduate. On top of that, Emily spent five days at Camp Yawgoog in Hope Valley, Rhode Island, where she was one of five girls in a camp with 65 people.

What does one learn as a Youth Leader?

“We learned presentation skills, how to deal with fights, how to set up trips, [and] how to teach a group of people,” said Newell. “We learned how to be yourself and never give up. We are the top leaders of Mass.”

Newell continues to use the skills she obtained at Leadership Training to guide the kids on her ship. Newell is a second-rank scout and works as the Cape Cod Squadron Boatswain, which means that Newell is the youth in charge of Sea Scouts in Cape Cod.

As one could probably imagine, it is pretty rare to see a female Sea Scout and Emily is one of the few paving the way for girls in the Scouts.

In a generally male-dominated activity, Emily is thriving and encouraging other girls to be fearless and stand up for themselves.

Newell’s work is nowhere close to being finished, however. She continues to blaze a trail for females in the Sea Scouts and she has no plans on stopping any time soon.

“I’m still working on lots of rights for girls in the co-ed scouting program,” Newell said. “Lots of doors have opened, but many still remain closed. That goes for scouting and in communities across the U.S.” 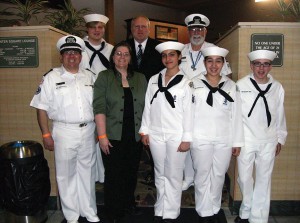