Last week was Homecoming Spirit Week at Old Rochester Regional High School.           Students participated in dress-up days, class skits, and an incredible pep rally on Friday. All of this spirit led up to Friday night’s victorious football game, where ORCA (Old Rochester Committee for Action) showed their school spirit by hosting a face-painting stand. Student ORCA members volunteered to paint the faces of fans with paws, players’ numbers, or anything else school-spirited.

ORCA, a club dedicated to creating a welcoming environment at ORR, is led by advisor and teacher Michael Jenkins. Jenkins said the face painting stand was “just to kind of let people know that we’re here; this is what we’re doing and what we’re all about.”

After getting their name out in last week’s football game, what’s next for ORCA? One project they are considering involves the new student orientation held at the end of August each year. At this orientation, new students typically watch a clip of the previous year’s graduating class’s senior video. Regarding this video, Jenkins said, “It really is not necessarily a good representation of the entire school, so our goal is to create a 10 or 12-minute video yearbook.”

This “video yearbook” would include the sports and clubs offered at ORR, so new students would know what kind of opportunities they can take advantage of. This welcoming video displays the ideals of ORCA.

“We’re just trying to build a better sense of community, of who we are,” Jenkins said. “And even if you may not be friends with somebody, that doesn’t mean you can’t necessarily support them or appreciate what they do.”

ORCA was founded just last year. A group of about 40 students took a trip to Bridgewater State College in order to learn about anti-bullying methods.

“We participated in the Massachusetts Aggression Reduction Center – MARC for short – program,” Jenkins said. “It basically gave us an idea about what some of the key issues were in terms of where students were feeling uncomfortable, [and] what they saw as some of the problem areas for our school.”

As a result, ORCA was formed to combat some of these issues.

ORCA avoids the “laissez-faire approach” to bullying and discrimination concerns. Although ORR has a mostly positive reputation in these areas, there is always room for improvement. This improvement, sought after by ORCA, will come in the form of increased school spirit and a “collegial” student body. 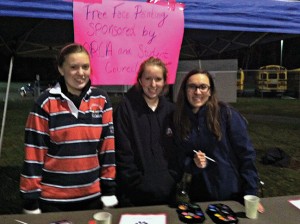