These students have spent their winter together in the Model United Nations (MUN) group and have been preparing for this conference for a while. The students who attended the conference with Faculty Supervisor Gary Sousa are seniors Samantha Chan, Ned Mitchell, Gwen McCain, and Jenna Weyant, juniors Kyle Rood, Ellen Park, Evelyn Xue, Vienna Zhu, and Stephanie Zou, sophomores Camden Baer and Max Gonye, and freshman Grace Douvos.

In committee, the students – or delegates – represent a country, read speeches, debate, and write resolutions for their designated international issue. It also allows students to debate and collaborate with other students from all around the nation.

“The best part of the trip was definitely the experience of meeting new people, speaking in front of them, and working with them,” said Baer. “The social dynamic of having to work with people you didn’t know and getting to know people from around the nation was amazing.”

Pairs of the 12 students each researched and participated in debates about different issues. For example, Chan and Weyant were a part of the World Health Organization and discussed water sanitation, immunizations, and antibiotic resistance.

Zhu and Xue were a part of a historical committee, which focused on the French Revolution and resolutions to food crisis and social injustice.

In committee, the discussion is detailed and intensive. Weyant reflected on that.

“Research is definitely a big part of preparing, but confidence is paramount,” said Weyant.

According to Baer, his biggest challenge was “speaking in the beginning of the conference.”

Although some of the Tabor delegates were experienced with Model United Nations, this was the first trip for many.

Weyant has primarily played basketball, but did MUN for the first time this year.

“Ever since I came to Tabor, I wanted to try something completely out of my comfort zone, so I quit basketball and did MUN,” Weyant said, adding that this was a good decision because she feels more aware of the world than she was before. “MUN has really helped me expand my horizons.”

Baer said that Model United Nations has always intrigued him.

“I do MUN because I find global politics very interesting, and the aspect of going somewhere, playing a role, and fighting for what the country you represent believes in intrigues me.” Baer called this “an experience like no other,” and felt that he personally gained a lot from the conference.

“The progress I made from the first day to the final day was extraordinary,” said Baer. “…From public speaking to writing resolutions.”

Tabor’s Model United Nations program is a medium through which students can further broaden their global awareness while learning important skills through writing, debating, and collaborating with peers. 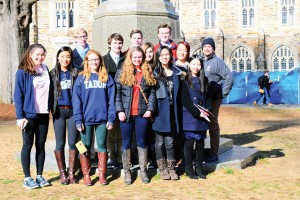