Longtime science teacher Mary Cabral will be retiring after teaching at Old Rochester for over 15 years. Her last day is Tuesday, November 25, and she recently described her time spent as a teacher and what she plans to do in her retirement.

Cabral has been teaching for over 25 years. In addition to her time at ORR, she also taught at Wareham High School.

“I took off some time, about ten years, to raise my children,” said Cabral. “I also taught two years at Newbury College.”

Throughout her career, Cabral has taught a wide variety of science subjects.

“I’ve taught so many different things, including Biology, but mostly I’ve taught Human Anatomy and Physiology.” During all three of her teaching jobs, Cabral has taught that subject.

“As much as I love teaching, it was time to give a younger teacher the opportunity,” said Cabral about retiring. She expressed a desire to travel with her husband, and said they have already planned trips to Mexico and California, as well as a cruise.

However, Cabral is not closing the door on working entirely.

“Who knows, there might be another career out there for me,” Cabral said. “I’m open.”

Reflecting on her time at Old Rochester Regional, Cabral said that her greatest accomplishments were the contributions she made in terms of adding to the science curriculum.

Upon beginning at the local high school, she wrote the course outline and curriculum for the human anatomy class, which had previously not been offered.

“I would hope to think that I increased course offerings in the Science Department,” said Cabral, “and in turn, increased the interest in science for the students of Old Rochester.”

Also on Mrs. Cabral’s mind before her departure are the relationships she has developed with both teachers and students over her time at ORR.

“Some of my most important memories are with my colleagues, time spent collaborating, and the students I’ve met while teaching,” said Cabral.

It’s clear that Mrs. Cabral has had a huge impact on ORR, especially in the way the Science Department has developed. Her contributions, particularly in the field of Anatomy and Physiology, will be recognized long after she leaves her teaching position. Here’s to wishing her the best in retirement! 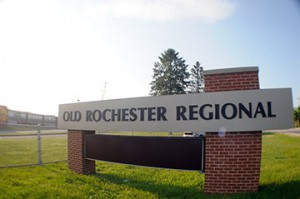