On the last day of school before holiday break 96 students of Old Rochester Regional High School competed in the annual Holiday Volleyball Tournament. 16 teams of six students each donned homemade costumes and picked team names. The teams were required to be equally split with three boys and three girls.

Only eight teams could make it to the finals. The final two teams came down to They Call Us     Nasty 2.0 and Diggie Smalls. They Call Us Nasty 2.0, an entirely senior team, was comprised of Quinn Henshaw, Evan Sylvia, Zachary Mathews, Brenna Maloney, Quinn Donovan, and Hannah Bouvette.

The high school’s gym was alive with the competitors and students fortunate enough to be able to get down to the tournament and cheer their classmates on. The air was thick with excitement and as it got down to the finals an edge of healthy competition settled in. Throughout the tournament, most competitors were really only in for the fun. When asked, most competitors only entered the competition for the fun, and that reflected in most of the playing. Conner Medeiros-Sweet, a senior and member of It’s All Good in the Hood, epitomized the atmosphere of the morning.

“I did the tournament because I have wanted to do it for years and this year I was able to do it with my friends, Fred Murolo, Mitch Midwood, Chloe Riley, Mikayla Demanche, and Abby Robinson. Our strategy was just to have fun, and just focus on making it to the finals,” he said.

While many teams kept the motto of “just having fun” close to heart, some teams were resolute in their “in it to win it” attitude. The contrast between teams made out to be an exciting morning for all students, whether on the court or in the stands. 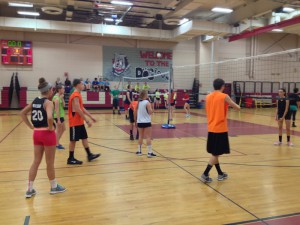