You are here: Home » Schools » Davis to Play for the USA U18 Hockey Team

Although the Winter sports season is just beginning at Tabor, Tabor Academy senior Samantha Davis has been playing hockey all year.

Davis was recently named to the USA U18 National Team after a series of training camps. Over the summer, Davis was invited to Lake Placid, where she participated in a training camp for the team. After this, she was named to the U18 select team and competed against Team Canada in a three-game series in Calgary, Canada.

This past fall, Davis was invited to the Pre-Four Nations Camp with the National Team players. This was “an amazing experience” for Davis – an event during which she had the chance to meet some Olympic competitors.

These camps and series led Davis to being named to the U18 team a few weeks ago. She and the team will compete in the Under-18 Women’s World Championships in Buffalo, New York next month.

Davis, who has been playing hockey since age seven, signed her letter of intent to continue her career at Boston University in November. She has been a varsity member of the Tabor Academy Girls’ Hockey Team since her freshman year and is now a co-captain of the team.

“I am excited about competing for a gold medal in a few weeks and for the experience I’m about to have,” Davis said. “I can’t wait to put on the USA jersey again because it never gets old.”

Despite all of her accolades, Davis is modest about her hockey career and seeks to improve even more.

“My goals as a hockey player are to keep developing my game, to become a better player and to learn from the older girls ahead of me,” said Davis. “I just want to be the best I can be.” 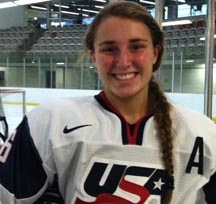