You are here: Home » Schools » Cultivating the Creative Spirit

When one walks down the art hallway at Old Rochester Regional High School, the art on the walls hangs proudly, allowing everyone to admire the skills of their peers. Currently, black and white portraits smile warmly at students who shuffle to their math-wing classes.

Last week, two of these outstanding artists were selected to be featured in an exhibition at the Dedee Shattuck Gallery in Westport, Massachusetts. The exhibition was titled “Cultivating the Creative Spirit,” and it showcased the artwork of high school students from Old Rochester, as well as artwork from students at Dartmouth High School, Durfee High School, Fairhaven High School, Greater New Bedford Voc Tech, and Tiverton High School.

Elizabeth Davis and Madeline Morris were selected to display their artwork at the gallery. Davis’ piece was a skeleton created with markers and water, to create a watercolor effect. Morris’ piece began as an assignment for art class, and Prismacolor colored pencils were used to create a life-like recreation of a chicken head.

The exhibit at the Dedee Shattuck Gallery was set in the center of the already existing exhibit, which meant the emerging artists’ artwork was front and center, quite literally. As Old Rochester Art Department teacher Joanne Mogilnicki said, “Up and coming artists are mentored and celebrated by the art that’s already on the walls from professional artists.”

Being selected to display artwork for this event was not easy. Hopeful participants submitted artwork to Mogilnicki, who then selected Davis and Morris as the most appropriate representation of the skills of Old Rochester students. Davis and Morris were then asked to select the artwork that they felt was the best portrayal of their skills, and that art was sent to a board of judges at the Dedee Shattuck Gallery to be approved or rejected. Both students were approved by the panel and were allowed to display their work for the event.

The environment of the event was very supportive of the up-and-coming artists, as Mogilnicki pointed out.

“A lot of the work on the walls had red dots [sold stickers] on them, so you could see that people actually support artists and buy work and bring it home and hang it,” said Mogilnicki. “So there’s this whole culture out there that people don’t necessarily know about unless they’re actively involved in it, and that’s viewing art, appreciating art, and having art around you when it’s possible … being around other high school student artists, and seeing their work.” She continued, “It gives you a perspective of what’s out there amongst other students or people their age that are involved in making and are interested in the arts.”

As for Morris and Davis, they enjoy the art class at Old Rochester, as it challenges artists to discover their strong suits.

“We get to experiment and dabble in different media,” said Morris. “Sometimes she’ll [Mogilnicki] have challenging projects that maybe you don’t necessarily like to do, but it helps you grow to see what you’re good at and what you need improvement in.”

With such a large amount of possible mediums available, Davis and Morris have been able to discover a few favorites to work with.

“I really like using paints, but in weird ways” said Davis, to which Morris immediately responded, “And I really hate paints because I’m terrible at them. I like to use colored pencils and charcoal, that kind of thing.”

This artistic diversity was showcased at the exhibit, in the artwork from the high schoolers and the professional artwork that regularly hangs on the walls of the Dedee Shattuck.

As a final piece of advice, Morris invites growing artists to expand upon their talents the way she did.

“Even the things you look at from last year, you’re like, ‘Why would I do that, it looks terrible?’ But we just drew all the time,” said Morris. “That’s how I got better. I just drew, and even though it was really bad, I still continued to draw.” 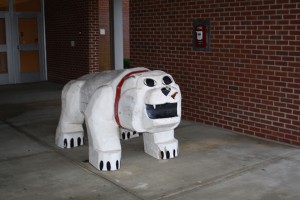