You are here: Home » Schools » Class of 2014 Celebrates Final Year

The senior class of Old Rochester Regional High School gathered at Ned’s Point last Thursday to make some lasting memories before they part after graduation next June. The students enjoyed a day of sunshine, pizza, and outdoor games.

“It was an excellent day for the kids,” said Mary Wickman, an ORR English teacher and one of the senior class advisors. “We had beautiful weather.”

Before heading onto the school buses, the students took group photos on the football field: one as a class, one each for the students of Rochester, Marion, and Mattapoisett, and one for the students in the School Choice program. These pictures will go into ORR’s yearbook in the spring.

At Ned’s Point, the seniors took the traditional picture in the shape of the class’s year. This year, the class of 2014 proudly formed a “14” in the grassy lawn, all sporting their senior T-shirts. The back of the shirts display the class’s motto, “This Is Our House,” with the “H” formed from a “14.”

Throughout the day, students took pictures, chatted, and played games such as football, frisbee, and tug-o-war. Sam Barrett, a senior student, interviewed students to create footage for the video shown at senior assembly the end of the year.

“It was really fun,” said Sam Allaire, a senior student, “We bonded as a class.” Recalling her brief interview with Barrett, Allaire said, “It made me reflect on where I want to be when I grow up.”

Allaire was not the only student with life after high school on the mind. Other students voiced their enthusiasm to graduate at the end of the year.

When asked what she would miss about ORR, senior Gabbi Gleiman responded, “Everything. I love the teachers and the people here.”

Although the year is just getting started, seniors are already preparing for the end. Wickman reflected on the energy in the class of 2014. “I’m impressed by their creativity more than anything,” she said, recalling the ideas she’s seen within her classroom and the senior class government.

As the Ned’s Point class trip came to a close, it became clear that the seniors have kicked off a successful final year.

In other news, the State Student Advisory Council (SSAC) had their first conference of the school year last Tuesday, September 17th at the Department of Elementary and Secondary Education in Malden. As decided at the summer conference, the students focused on how they could help develop digital learning in Massachusetts.

The next SSAC meeting will be in November, while the Southeastern Student Advisory Council will hold their first meeting next month at Bridgewater-Raynham High School. 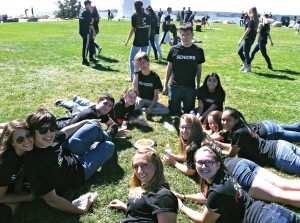